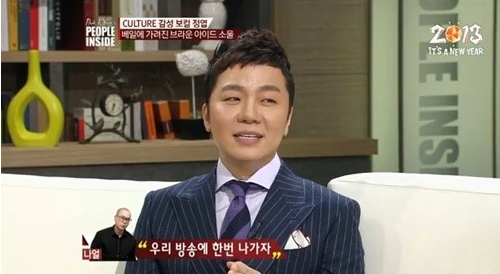 On January 8, Jung Yeob made a guest appearance on tvN’s “Baek Ji Yeon’s People Inside” show where he was asked, “After 10 years since Brown Eyed Soul made their debut, why have they not been on TV?” Jung Yeob corrected Baek Ji Yeon saying, “Well it would only be Naul who hasn’t appeared on TV.”

He explained, “I think he finds it burdensome to appear on TV. From my vantage point, I think Naul just thrives on being an artist. He always used to say how all he wanted was to go live on a mountain and paint for a living. He doesn’t want to get all dressed up and be worried about his image either. I’m still not sure what the exact reason is for why he doesn’t want to appear on TV as well.”

Jung Yeob also revealed, “Naul would sometimes entertain the idea of appearing on TV together. When I asked him when, he would say ‘Let’s go together when we’re 50 years old.’ Compared to artists from abroad, our nation’s artist groups have a pretty short lifespan. I think what he meant by that comment was that he wanted us to be able to make music until we have white hair and wrinkles. To hear that coming from him struck me as deeply profound.”

Baek Ji Yeon responded to this by saying, “Then when that time comes, will you both be appearing on TV together?” to which Jung Yeob said, “That would be amazing. I would hope that our promise to make music together for many more years would be fulfilled.”

Brown Eyed Soul
Naul
Jung Yeob
How does this article make you feel?