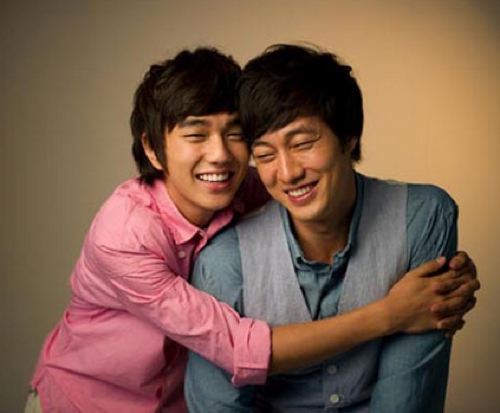 So Ji Sup’s upcoming mini-album will be released at the end of January. In the music video, So Ji Sup plays the main character, who is in his thirties. Yoo Seung Ho will play a younger version of So Ji Sup in his twenties. It is said that both actors looked like brothers, as they displayed their close friendship.

These photos were from January 10. On this day, Yoo Seung Ho filmed a scene with Park Shin Hye in a club for six hours.

While filming, So Ji Sup and Yoo Seung Ho do not share any scenes together since they play the same person. However, when So Ji Sup was done with his parts for the day, he stuck around to hang out with Yoo Seung Ho by visiting him in his waiting room with snacks. So Ji Sup felt very grateful toward Yoo Seung Ho’s decision to appear in the music video since Yoo Seung Ho is currently very busy with his drama and other activities.

So Ji Sup expressed his affections for Yoo Seung Ho by gifting him with a box of chocolates as well. Then Yoo Seung Ho said, “Did I just receive a love confession with this box of heart chocolates,” which made everyone laugh.

Yoo Seung Ho appeared in So Ji Sup’s music video for “Lonely Life,” which was released in 2008. They also worked together on a different project before.

For this music video, both of them exchanged a lot of different stories and advice for each other. Yoo Seung Ho complimented So Ji Sup on his musical achievements while So Ji Sup talked about acting.

Yoo Seung Ho
KPLG
So Ji Sup
How does this article make you feel?