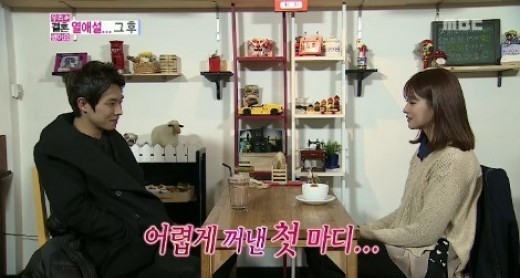 After a scandal erupted between Oh Yeon Seo and Lee Jang Woo, “We Got Married” aired a segment of Oh Yeon Seo and MBLAQ‘s Lee Joon having a heart to heart conversation about the entire issue.

Oh Yeon Seo started off by saying, “I don’t know how to start or what to say but I’m so sorry. I was so shocked when these dating rumors emerged. That day, I didn’t know whether or not I should call you but I thought I just tell you face-to-face.”

She continued, “Jang Woo oppa and I got really close through the drama. We ate out together, drank tea together and talked a lot about acting and stuff. So when our picture was taken, I really didn’t know people would see that and think that we were dating. Honestly, this is the first time this happened to me so I thought too easily. So I worried about you even more.”

Oh Yeon Seo continued, “Last week, I saw the episode where we went to Hawaii. We looked so cute. While watching that, it felt like a dream and even though I was laughing, I felt sad. I was really worried about what people would think. People were saying that all of my words and actions toward you [Lee Joon] were lies and fake. My heart ached a lot at the fact that you had to be hurt by my actions. You didn’t even have to be involved in this but your name was mentioned a lot and I hated that.”

Lee Joon replied, “I know how it feels to have something happen even if it wasn’t what you meant,” and comforted Oh Yeon Seo by telling her his own personal experience. During the individual interview, Lee Joon said, “Honestly, I was really mad. I thought this whole thing was really bad for me and I thought I was really unhappy. But then when I saw her, I tried to put myself in her shoes. I knew she would be really grateful if I came to meet her and listened to what she said.”

Then the two of them blew out the candles for a cake for the New Year and promised to go back to the beginning.

Oh Yeon Seo and Lee Jang Woo’s dating rumors emerged on January 3. The two of them are co-stars for the MBC sitcom, “Oh Ja Ryung Is Coming.” The rumors stated that the two of them had been dating for one month and photos of them on a supposed date were posted. At first, Oh Yeon Seo’s agency confirmed the rumors. But later on, they stated that the two actors were just close friends.