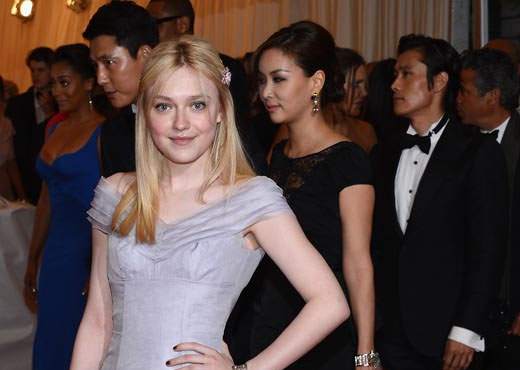 Dakota Fanning Compliments Go So Young For Her Beauty

On January 12, an interview with Dakota Fanning was broadcast on KBS 2TV’s “Entertainment Relay.”

In the interview, reporter Angela Kim asked Dakota Fanning, “This photo has become a hot topic of conversation in Korea. Do you have any idea as to why that might be?” and handed her the photo to look at.

In the photo, Dakota Fanning is seen taking a photo while Jung Woo Sung, Go So Young and Lee Byung Hun can be seen standing behind her. The three Korean actors and Dakota Fanning were attending the 2012 US Metropolitan Institute Costume Gala that was held in New York on May 7.

When Dakota saw the photo she remarked, “Is it because of the actors that are behind me? Aren’t these actors famous in Korea?”

She went on to explain, “That day we were all at an event. The lady in the photo I thought was very pretty and all of them seemed so friendly.”