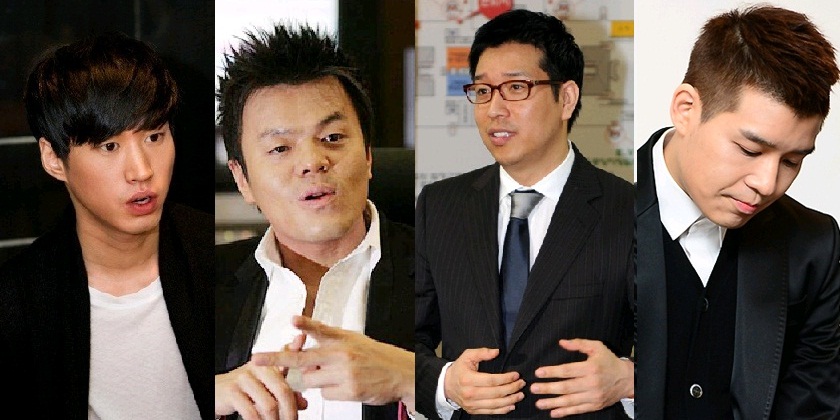 Celebrities Who Went to Court in 2012

It seems that we start 2013 with the season of court rulings for celebrities of the Korean entertainment industry.

Rapper Tablo finally ended his 2 year legal battle with TaJinYo. Singer and CEO Park Jin Young, singer Kang Sung Hoon, and MC Kang Byung Kyu will also receive the final court verdict this month for their individual legal issues. There is great interest in what activities these celebrities will partake once they are free from the legal problems.

Epik High’s Tablo’s problems began when a group call TaJinYo (We Demand Truth from Tablo) formed, questioning the authenticity over Tablo’s higher education. The group took legal measures to accuse Tablo of forgery, and when Tablo proved his innocence with legal documents he fought back and sued nine members of TaJinYo. The court ruled in Tablo’s favor and three members received prison sentences and six members were put on probation. After several attempts at appeals, the final appeal was dismissed by the court on January 4 of this year.

While Tablo may have won legally, the past two years was a difficult time. Not only was Epik High unable to have activities because of the legal issues, Tablo’s father passed away. Fortunately, Epik High made a comeback with their seventh album with several hits like “Don’t Hate Me”, “Cold”, and “Up.”

The CEO of JYP Entertainment, Park Jin Young, was accused of plagiarism by composer Kim Shin Il. Kim Shin Il claimed that IU’s “Someday” from the Dream High OST had a similar composition, rhythm and harmony as Ash’s “To My Man.” The two composers went to court and while the similarities in both songs are noticeable, Park Jin Young brought up other songs that are similar in his defense. The Korean Music Copyright Association was also brought into the case.

Kang Sung Hoon of the Sechskies will receive the final verdict on his fraud case on January 23.

After being released the singer said, “If given the opportunity I would like to go back to the K-Pop world after getting back on my feet.” On that day his former members Kang Soo Won and Kim Jae Duk were there to support him, which the possibility of a future reunion of the legendary original idol group.

Kang Byung Kyu’s trial for several convictions is set to end on Febuary 1. The MC and former baseball player was charged with embezzlement, fraud, assault, and libel.
From 2010 to 2011 Kang Byung Kyu embezzled 48 million won (about 45,000 USD)

Last November the court combined all four charges and sentences Kang Byung Kyu to two years and six months in prison. On Febuary 1 the court will decide if Kang Byung Kyu may continue his broadcast activities.