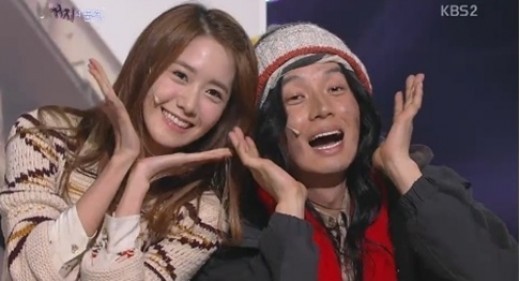 Girls’ Generation‘s YoonA recently appeared on KBS 2TV’s “Gag Concert” on the popular corner, “A Beggar’s Dignity.” YoonA transformed into a “flower beggar” and showed off her explosive cute charm.

YoonA appeared on “Gag Concert” on January 13 and appeared as a girl who has a crush on comedian Heo Kyung Hwan.

When YoonA was asked, “Why do you like Heo Kyung Hwan,” she humorously answered with the popular saying, “Are you curious? If you’re curious, give me 4,500 won,” and displayed her gag skills.

Meanwhile, “Strong Heart” will air its last episode with a Girls’ Generation special.