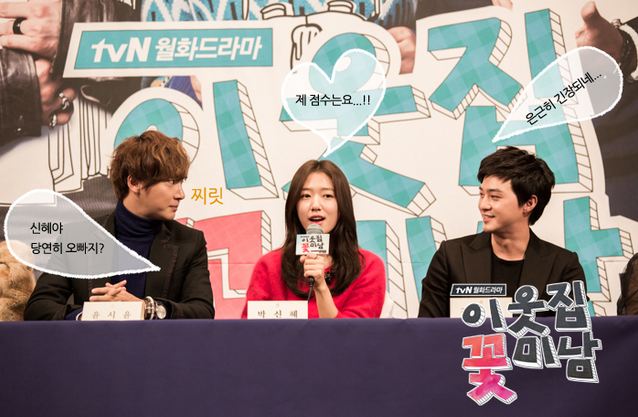 Actors Yoon Shi Yoon and Kim Ji Hoon are a step closer to qualify as a candidate for this year’s most popular bromance couple.

The picture of the two was released on January 14 where they puckered up for a kiss. Currently filming for tvN’s weekday drama “My Flower Boy Neighbor,” the two actors got ready to smooch. It’s been revealed that they promised to give a kiss if the drama breaks 5% in viewership ratings. (author’s note: single digits is considered low for major broadcasting stations MBC, KBS and SBS while breaking 1% is considered good for cable channels)

A production staff representative shared, “Yoon Shi Yoon and Kim Ji Hoon playfully practiced for a kiss while filming all night after the 2nd episode was broadcast. The picture received a hot response from the viewers after we released the picture right before the broadcast of the 3rd episode.”

“My Flower Boy Neighbor” is based on the webtoon “I Peek at Him Every Day” and is currently being well-received for the artistic cinematography, production staff’s attention to detail as well as great acting.

KPLG
Yoon Shi Yoon
My Flower Boy Neighbor
How does this article make you feel?