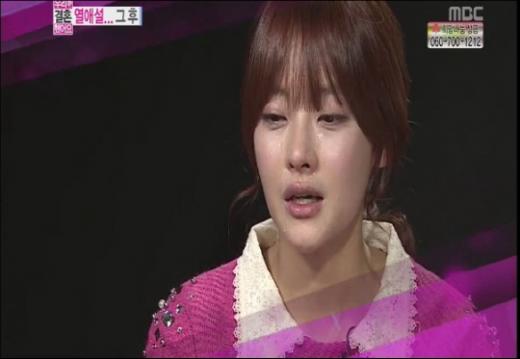 Oh Yeon Seo denied alleged dating rumors with actor Lee Jang Woo on MBC “We Got Married” in tears. However, many fans and viewers are continuously criticizing her for faking her tears in order to stay on the show.

Oh the most recent episode of MBC “We Got Married,” Oh Yeon Seo and Lee Joon met up with one another for the first time after Oh Yeon Seo’s dating rumors with Lee Jang Woo broke out. Oh Yeon Seo said, “I don’t know what to say, but I’m sorry. After the dating rumor broke out, I contemplated whether to contact you or not. We (Lee Jang Woo and Oh Yeon Seo) are not dating. We are just close colleagues. I’m so sorry that your name was brought up because of something I did.”

Lee Joon responded honestly, “When I first heard about you and Lee Jang Woo, I was sleeping and I thought it was just a dream. I really hated you for that in the beginning. I thought, ‘How could she do this to me?’ But I remembered the time I became the hot potato because of something I said. When I think about that time, I understand how unfair it is for you. If you’re confident and dignified in your claims, how can I not believe you.”

After this episode aired, about 500 new posts appeared on “We Got Married” official forum. Opinions of the viewers divided largely into two opposing perspectives. On one hand, some viewers were furious because they feel betrayed and ridiculed by Oh Yeon Seo’s alleged relationship with Lee Jang Woo. On the other hand, other viewers wanted to let go of the issue since “We Got Married” is still not real as it claims to show celebrities’ “virtual marriages.” Netizens also praised Lee Joon for being so understanding.

Those who are asking for Oh Yeon Seo’s dismissal from the show are angry mainly because of the inconsistencies in Oh Yeon Seo’s response to the initial scandal. When the news about her alleged romantic relationship with Lee Jang Woo first broke out, Oh Yeon Seo admitted that they were seeing each other. However, she soon changed her story once people started discussing whether she should remain on “We Got Married” or not. Prior to her scandal with Lee Jang Woo, Oh Yeon Seo kept saying “Lee Joon is my ideal type of man,” and “I like Lee Joon more than Lee Jang Woo” publicly. Many netizens now perceive such comments as Oh Yeon Seo’s conniving ways of attracting more viewers to “We Got Married.”

A viewer wrote on “We Got Married” forum, “She begs for sympathy with fake tears and completely missed the point of the controversy. She talked about how she felt bad for her partner instead of actually explaining her nature of relationship with Lee Jang Woo.” Another netizen agreed, “She shouldn’t have admitted that she and Lee Jang Woo are dating in the first place. The production crew at ‘We Got Married’ should’ve been more sensitive, too. This whole episode about Oh Yeon Seo and Lee Joon just befooled the viewers.”

Pop culture critic Jung Suk Hee commented, “‘We Got Married’ is in the form of mockumentary. The viewers emotionally identify with the show in its documentary moments. Everyone knows that there are scripts and these celebrities are not married for real, but they still want to believe that these celebrities are emotionally involved with one another. This is the main reason why ‘We Got Married’ is so popular. With that myth debunked, views can no longer be immersed in the show like they used to.”

Lee Jang Woo
Lee Joon
We Got Married
Oh Yeon Seo
How does this article make you feel?