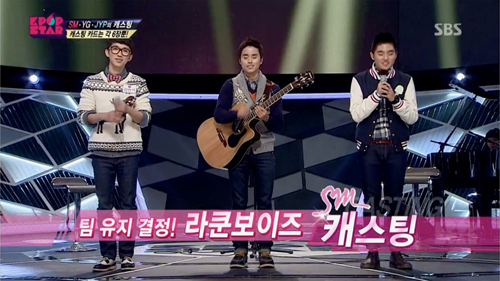 Oh No, the “Raccoon Boys” Did It Again!

On the January 13 episode of SBS K-Pop Star, the “Raccoon Boys” did an awesome performance! They were so good together that all of them were cast into SM Entertainment. In a previous episode, the “Raccoon Boys” had blown everyone away with their rendition of “Thriller.” This time around, they performed the Wonder Girls’ “Like This.”

After the “Raccoon Boys” performed “Like This” they were told, “Every time we see their performances we anticipate it,” “They are the best product out of K-Pop Star,” and “This cover was superb, you are very skilled, your teamwork is impeccable.”

The next week will be a continuation of this “casting audition final” where nearly 50% of the contestants will be cut.

KPLG
K-Pop Star 2
Raccoon Boys
How does this article make you feel?