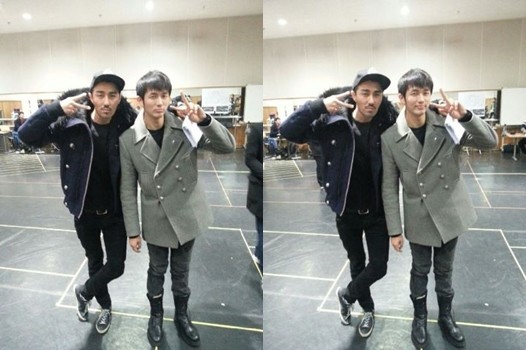 On January 14, Seulong tweeted, “With the handsome Cha Seung Won, whom I like the most in the entire country. We are hard at work, practicing for a great concert that will be held on January 22. Hyung, I want to be like you. Cutie peace signs in the photo,” along with a photo.

In the revealed photo, Cha Seung Won and Im Seulong are standing next to each other, looking at the camera while throwing up cute peace signs. Although Cha Seung Won is 17 years older than Seulong, his handsome middle-age looks have drawn many eyes.

Netizens who came across the photo commented, “Cha Seung Won is the finisher of youthful faces,” “I really like both of them,” “How can they look so close?” “You are both really cute and warm,” and more.

Meanwhile, Cha Seung Won will be appearing in MBC’s “Knee Drop Guru” along with Japanese star, Kusanagi Tsuyoshi on January 27.

Cha Seung Won
KPLG
Im Seulong
How does this article make you feel?