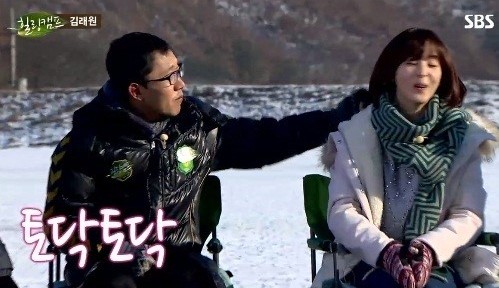 Kim Jae Dong‘s actions toward Han Hye Jin, who recently went through a break-up, has been catching the eyes of the public.

On the episode of “Healing Camp” that aired on January 14, actor Kim Rae Won was the guest of the day.

During the episode, Kim Rae Won revealed his love for fishing. He said, “I don’t have luck for catching fish so I’m not that good at fishing.” Then Han Hye Jin asked, “How is your luck with women?” Then Kim Rae Won answered, “I still don’t know about that yet.” As if she could relate, Han Hye Jin replied, “Yes. You can know about that only after you get married.”

Then Kim Jae Dong proceeded to pat her on the back, as if to comfort her. At that moment, the background music played Lee Han Chul’s “Super Star,” which is a song of hope and comfort for one’s future. When Han Hye Jin expressed her distaste for Kim Jae Dong’s actions, he simply said, “I’m just supporting you because you’re doing so well right now.”

Besides that moment, whenever the topic of love came up, Kim Jae Dong would playfully insert, “Han Hye Jin is not in the mood to talk about that right now.” This is all because of Han Hye Jin’s recent breakup with her much publicized relationship of nine years with singer Naul.

Meanwhile, Kim Rae Won spoke about a lot of hidden things in his life, including his intense first love experience.