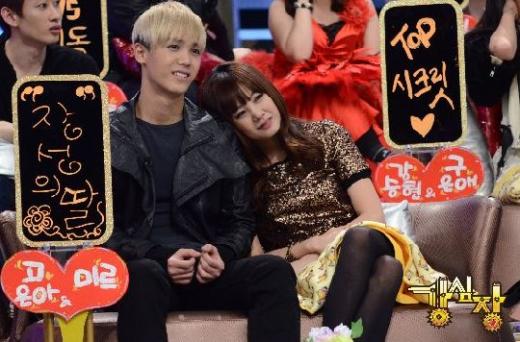 On January 14, actress Go Eun Ah made an appearance on the pilot episode of MBC’s newest talk show, “Talk Club Actors.” During the episode, she talked about her relationship with her younger brother, MBLAQ’s Mir.

Go Eun Ah started, “While the public may see Mir as an idol and a celebrity, to me, he is my little brother.” She explained, “Because our family lives separately, we tend to be very expressive when we display affection for each other. I wasn’t really paying attention to others and gave him a peck. However, the next day, there were a lot of articles, and some of them even claimed that I committed incest.”

She continued, “I think the public saw me as a woman rather than Mir’s sister. In our family, we kiss all the time. I can’t even take pictures with my brother anymore because I’m afraid people might misunderstand again.”

Back in 2010, Go Eun Ah created headlines after showing affection for her brother on air. She starred in Mnet’s “Scandals,” where she introduced her non-celebrity TV boyfriend to her Mir. While saying goodbye, Go Eun Ah asked Mir, “Give me a kiss. Do what you normally do and show me your love,” on camera. Flustered, Mir said, “Not now,” which led Go Eun Ah to plant a kiss on Mir’s lips.

At the time, netizens commented, “Kissing your brother, who’s all grown up, in public just doesn’t seem right,” “No matter how tight they are, I can’t understand her,” and more.