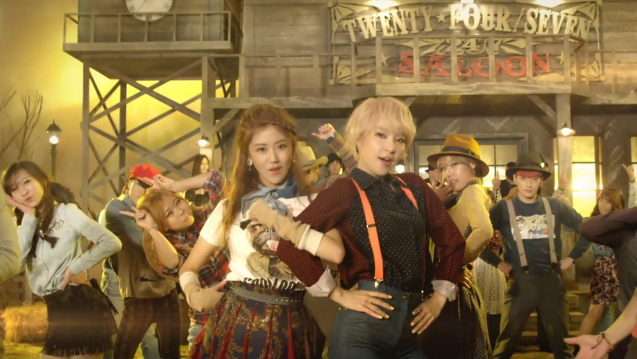 After previously releasing individual teasers for Jun Ji Yoon and Heo Ga Yoon, another teaser for 2Yoon‘s new song “24/7” has just been revealed.

Once again, we hear the same catchy guitar melody from the previous teasers. This time, we see the duo in front of an old western saloon, and joined by many backup dancers.

“24/7” is a pop-country number with a cheerful, catchy melody. It is the title track of 2Yoon’s first mini album “Harvest Moon,” which will be released on January 16.

Other songs included in the album are “Nightmare“feat. Jung Il Hun of BTOB, “Why Not,” “Sseh Sseh Sseh” feat. Kikaflo and “Black Swan” feat. Nassun. It has been reported that Ji Yoon also took part in penning, composing, and arranging “Sseh Sseh Sseh.”