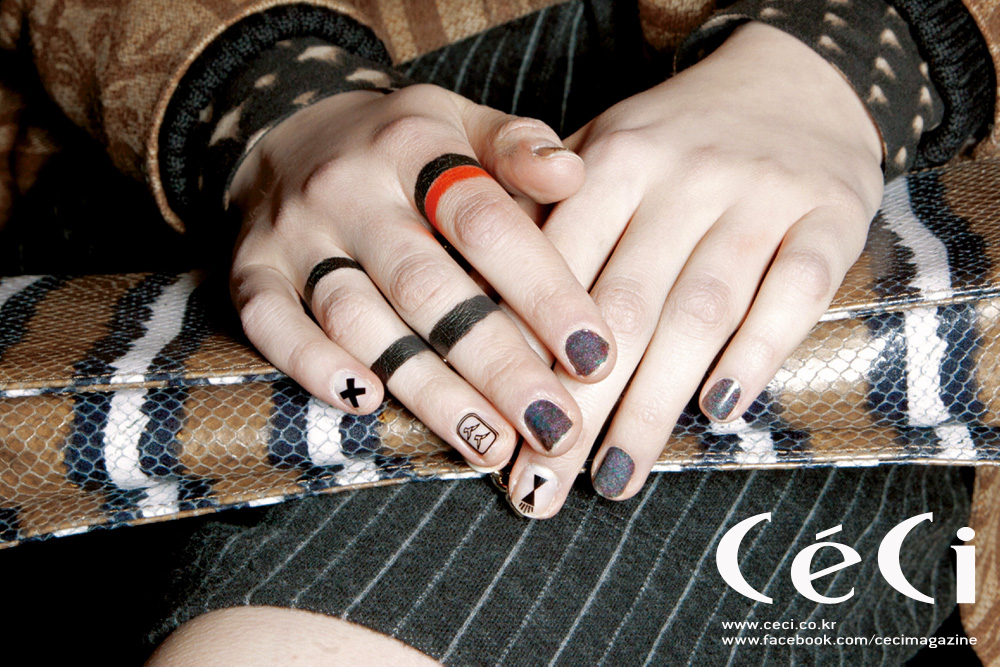 Nails are the finishing points of one’s fashion and celebrities aren’t excluded in this fashion trend. We were able to take a look at the hot nail patterns that’s currently appearing in dramas, album jackets and even press conferences. Flip through the gallery to see what captured the hearts of many female celebrities!

Tiffany’s Jewel Nail
Jewel nail trend consists of accessories like stones and studs and many members of girl groups love this type of nail art. From Ailee to Son Dam Bi, this nail pattern can be found worn on many female celebrities.

Jewel Nail Tutorial
1. Cut your fingernails near the tip so that it looks like a square and then put on the base coat. Afterwards, put on glitter nail polish and follow up with nail polish with bigger glitter pieces for a more dimensional look.

Jewel Nail Tutorial
3. Put on a jewel sticker on the thumb since it’s hard to make it elaborate. Afterwards, put on a thick top coat so it won’t fall and stay in place.

How it looks all together~

Heart Nail Tutorial
1. Cut your fingernails so the tip would look round like the picture. Then, put on the base coat and wait for it to dry. When ready, put on nail polish from the middle left of the nail and brush downwards.

Heart Nail Tutorial
2. Now, do the same from the right side. Apply the top coat generously and place a small gem to give the overall look an edge.

A unique twist to French nails~

Current Trend: Marble Nail
Either marble nail or art nail, have fun using your fingernails as a canvas! Be inspired by your surroundings and even your attire. Trendsetter HyunA enjoys color nails as well.

Marble Nail Tutorial
1. Put on tape on the fingers near the finger nail so it won’t get nail polish on it. It’s good to put on vaseline too.

Marble Nail Tutorial
3. Get rid of the excess nail polish with a toothpick.

Marble Nail Tutorial
4. Take the fingernail out vertically and take off the tape well after the nail polish dries.

Marble Pattern Tutorial
1. Put cold water in a cup and put in nail colors of choice.

Marble Pattern Tutorial
2. Use a toothpick to draw the shape you desire before the nail polish melts.

Marble Pattern Tutorial
3. If you move the toothpick sideways on one side and draw a straight line on the perpendicular side, you’ll create a stripe pattern.

Add a jewel sticker for an extra sparkle!

Pop quiz! Do you know what type of nail pattern is used for the photo on the very front page?