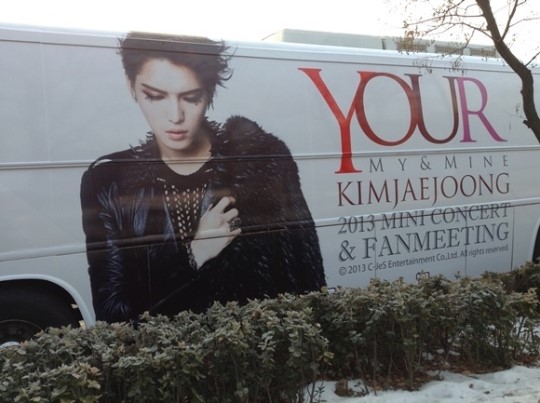 On January 15 on eNEWS, Kim Jae Joong’s agency C-JeS Entertainment announced, “We have finally launched the promotion for Kim Jae Joong’s upcoming album. The fans will now be able to see Kim Jae Joong’s face everywhere including the buses, building walls, and search engines such as Naver and Daum.”

Kim Jae Joong has already released one of the songs titled “One Kiss,” which has achieved number one rank on the iTunes’ Rock Chart in Japan, Singapore, and Taiwan. In addition, tickets for his upcoming solo concert on January 26 and 27 have already been sold out, proving that his new album will undoubtedly be successful.

The promotional teaser images of Kim Jae Joong can now be seen on several buses and the major shopping malls in cities including Seoul, Kang Nam and Myung Dong.