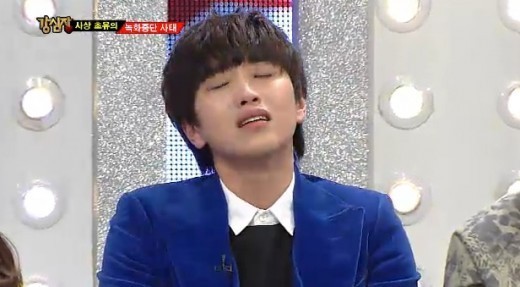 B1A4’s Sandeul mustered up courage to share his painful story with his fans.

On January 15, one of the guests (actress Kim Jung Hwa) tearfully shared about sending her mother off after she passed away from cancer. Many guests shed their tears and B1A4’s Sanduel wasn’t an exception. He was feeling especially vulnerable at the moment and tried to brave through his story when it was his turn to talk.

He started off, “My grandfather currently has cancer, but he can’t receive treatment because he’s in the last stages.” After pausing a bit, he added, “However, he doesn’t know that he has cancer.”

He explained between tears, “He has a bright personality. We thought it would be better if he doesn’t know since he’s not able to receive treatment anyway. Everyone in the family tries to act like nothing is wrong around him.”

After he finished talking, Sandeul was still very sad. Actor Park Shin Yang requested that they stop filming for a moment to give Sanduel time to recover and transition into the next segment of the show.