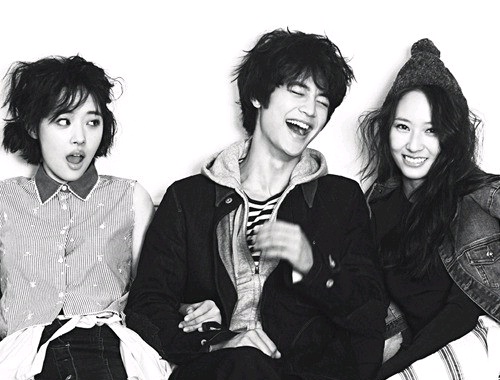 Minho, Sulli, and Krystal Look Like Siblings in “High Cut”

Minho of SHINee and Krsytal and Sulli from f(x) came together for a magazine pictorial that showed their compatible looks.

In the pictures, the SM family members look fresh and youthful in their denim focused outfits. Their bright faces and enviable bodies made the three look like a set of very good looking siblings.While it may be expected that the group mates and same age Sulli and Krystal show their close friendship, during the photo shoot Minho fit right in comfortably like their friendly older brother.

In the interview, Sulli was asked what she wanted to do after she became of age. “All the things my company doesn’t want me to do,” she jokingly answered. “From the first day I want to do practical stuff, like listening to “Rated 19” (similar to rated R) music. GD&TOP‘s “Knock Out” is rated 19 and so are a lot of the hip hop music that I like.”

Minho spoke about his close friendships with his hyungs. “I keep in touch with Kwanghee (from ZE:A), who always brightens up my mood. I hang out with DBSK‘s Changmin and Super Junior‘s Kyuhyun a lot. We like to drink, so we share drinks and talk.”

Krystal revealed what was in store for f(x). “Even though I debuted four years ago, because we haven’t released many albums I still feel like a rookie singer. We always prepare for albums with a new mindset. We are currently recording and in the talks for releasing a new album.”

The 94th issue of “High Cut” will be available on January 17.