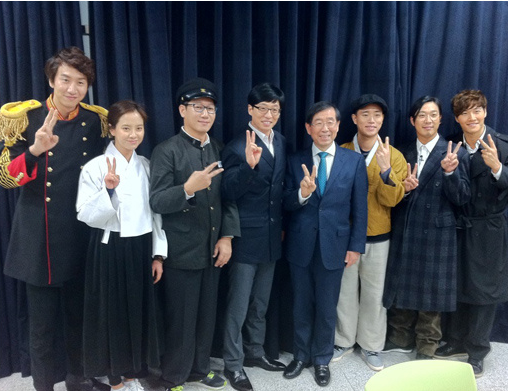 “Running Man” Spotted Shooting in The Heart of Seoul

On January 14, members of the SBS variety show “Running Man” were spotted in the heart of Seoul dressed as patriots who participated in the Korean independence movement during the Japanese colonial period.

They were seen shooting at City Hall, the Seoul Metropolitan Library, the Seoul Citizens’ Hall, and in various main subway stations.

The members first started shooting at around 3 p.m. at the first basement floor of the Seoul Citizens’ Hall and raced to the subway stations afterwards. The people passing by were delighted to see the members before their very own eyes and started to take pictures to post them up on their SNS.

At 7 p.m., the Running Man members transferred themselves to the passage between the Seoul Metropolitan Library and the City Hall. They aroused curiosity among the surrounding people as they were concentrated on racing each other dressed in costumes and foreign tourists who were nearby stood by the members and watched them with fascination.

When member Kim Jong Gook waved his hands to the fans, the people cried out encouragements and waved back.

While this scene will not be shown to the audience, the Running Man members also met up with the mayor of Seoul, Park Won Soon.

After the shooting, at 9 p.m., Park Won Soon posted a picture on his Twitter and wrote a short message: “The Running Man shooting brightened up the City Hall. This picture was taken after they had taken a rest and were each given a cup of coffee. I’m not going to be on the show but let’s all watch the show.”

An official of the Seoul City Hall said, “Part of the shooting was done in order to introduce the opening of the Seoul Citizens’ Hall and other of our landmarks. We are also planning on promoting our citizens’s tours to various first-classbuildings that boast New Renewable Energy and eco-friendly energy.”