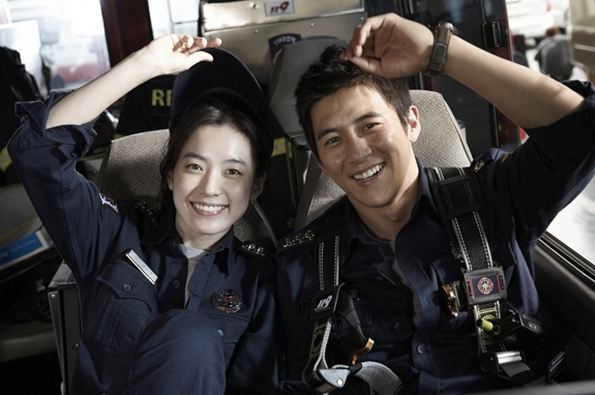 Don’t you like a guy (or a girl) who keeps his promise? Well, Go Soo previously made a promise that he’ll go on a date with a fan if his latest movie “Love 911” exceeded 2 million viewers. And the movie indeed exceeded 2 million movie tickets, which means that one fan just got a dream date.

On January 16, a website selling movie tickets held the one-on-one date event and picked one lucky fan. On this day, Go Soo and the fan met up at a cafe in Jongno, Seoul and had tea while they conversed. The fan is a female university student in her 20s and she talked about daily life worries and her thoughts about his movie “Love 911.”

After spending 2 cozy hours together at the cafe, they headed out and took a stroll. They stopped at an outside street vendor and some spicy rice cakes which tastes even better when eaten during the cold winter.

The fan later shared her unique experience, “I was nervous at first, but he was really friendly and he felt like an older oppa after some time. He really made me comfortable. I’m really thankful for all the wonderful advice you gave and for not being awkward while we talked. It really was a great time.”

Meanwhile, “Love 911” was released on December 19 and has been receiving good reviews from the public. It’s about an unlikely romance between a widower firefighter (Go Soo) and a doctor (Han Hyo Joo) with a fiery spirit.