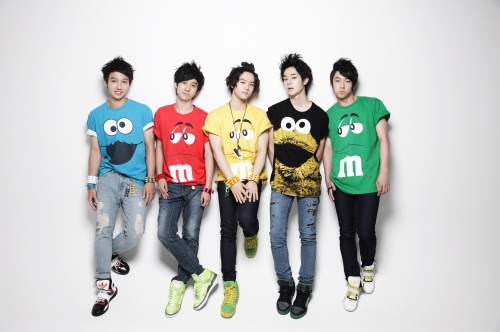 Before debuting as an idol group, Iconize has been gaining press attention for being selected as promotional models.

On January 15, Iconize’s entertainment agency Nekki Entertainment revealed that the members of Iconize had already signed a contract with teen clothing brand Intercrew for 6 months as endorsement models.

It is highly unusual for any rookie artist to be able to cinch such an endorsement deal before having the backing of previous experiences in modeling for brands and such.

A representative from Intercrew explained why they picked Iconize to represent their brand by stating, “If you look at the idols who are promoting their music right now, they are in their twenties and give off a powerful, masculine image with their choreography and appearances. On the other hand, Iconize seems more like a musician band of high schoolers who would appeal to younger audiences with their cute faces and animated characters. We think that’s what sets them apart from other groups, and hopefully it will give our brand a distinction too.”

Nekki Entertainment also revealed that Iconize is also in talks with another sports brand for possibly endorsing their brand as well.

Iconize is a teen male idol group comprised of 5 members who gave their first showcase on January 6, which attracted over 400 attendees. Iconize’s leader and guitarist is Kim Hyun, drummer Jung Hoon, electric guitarist Jung Young Bin, base guitarist Cha Bum Jin and vocals Lee Doo Ryut. The average of their ages is around 18 years old.

Kim Hyun and Jung Young Bin were the ones to first start performing together, and then the rest of the members joined the team. Iconize was discovered by producer Go Suk Young of popular rock band Buzz’s album just last year. In an interview with Go Suk Young, he said excitedly about his discovery of the band, “I feel as though I discovered five treasures.”

It is reported that Iconize’s debut is a hotly anticipated one, for all the members boast more than just one musical talent, especially when it comes to contributing supporting vocals, etc.

Buzz
KPLG
Iconize
How does this article make you feel?