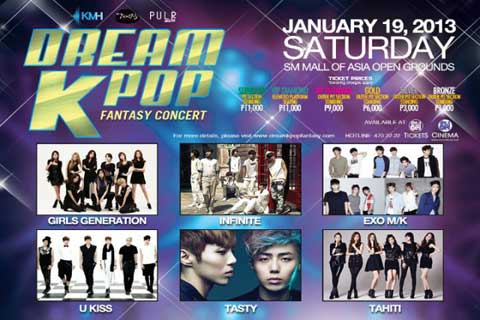 U-KISS, INFINITE and Tahiti have landed in Manila, Philippines in anticipation of the “Dream K-Pop Fantasy Concert” on Saturday. Before the main event on January 19, the groups sat down with the representatives of media on January 18 to answer some questions and share some thoughts.

Apart from U-KISS, “Dream K-Pop Fantasy Concert” marks the first time for the groups, especially the 2012 rookies to come to the Philippines and perform for their Filipino fans.

U-KISS said they are glad to be back and they miss Manila weather the most. It is member Hoon‘s first time in the Philippines, but the other members seem to have picked up on Filipino. Kevin delighted the crowd with an “I love you” in the local language.

According to the group, the Philippines holds a special place in their hearts as they held one of their first performances in the country. Upon their return, they said their teamwork has improved.

A happy development is that they are gearing up for their third album due out on March.

Earlier, it was reported that six-member girl group Tahiti’s participation in the Manila concert is their first overseas promotion, and kicks off their unofficial expansion into the Southeast Asian region. Tahiti is the only rookie girl group to perform at the “Dream K-Pop Fantasy Concert” that will also feature Girls’ Generation, EXO-K and EXO-M. As they are rookies, they declared looking up to senior singer BoA.

Tahiti also talked about a curiosity for Cebu, an island in Central Philippines, because they heard that it is a beautiful place.

INFINITE came out last for the press conference. The group’s impression of the Philippines was that it is warm, and have beautiful and cool ladies. They are excited to meet their fans, who give them the biggest motivation and happiness. They think the influence of K-Pop is great and were in the dark about their popularity.

Forward plans for the seven-member all-male group is to perform all over Asia.

Stay tuned to Soompi through Twitter (@soompi) and check back on the site for more coverage of this event.