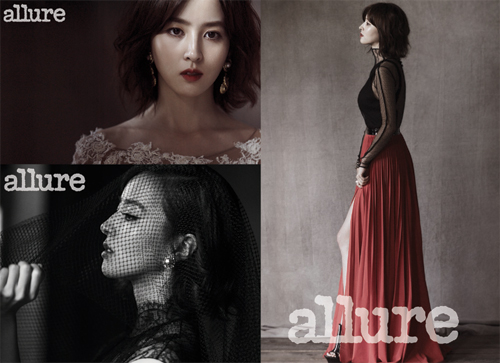 Han Hye Jin revealed her interview photoshoot for “Allure Korea.” For the magazine, the MC of “Healing Camp” showed off a beautiful and mature look. The concept of the photoshoot was a muse that is very charming and classy.

In the interview Han Hye Jin stated, “After the film ’26 Years’ a lot of people told me that my look has become more mature. I don’t mind getting older. From now on I would like to try new film roles.”

Han Hye Jin also talked about her family, (Her father recently passed away) “I have thought a lot about my family, life, and my job. I was thankful for the people that visited the funeral. Also, there were people who asked me to give them an autograph despite the fact that I was wearing mourning clothes. (Funeral attire) After seeing those things I realized that this is my life.”

She continued, “Throughout this process. I realized that I want to be someone who is with people when they are happy, but also when they are sad.”

Han He Jin’s interview photoshoot can been seen in the February edition of “Allure Korea.”

Allure
Han Hye Jin
KPLG
How does this article make you feel?