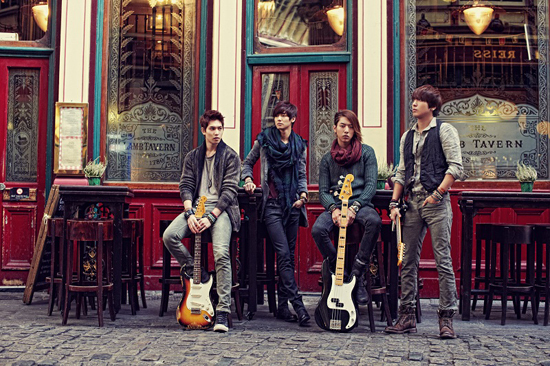 FNC Entertainment revealed, “CNBlue is currently planning to hold a world tour in 2013. The band is planning to hold a grand scale concert tour visiting countries like China, Singapore, and Hong Kong as well as other continents like Europe, Australia, North and South America.”

For now, Taiwan, Singapore, Thailand, Beijing and Shanghai have been finalized and the management is currently working with promoters in Europe and the United States to work out concert venue logistics.

For those who are currently residing or visiting Seoul, have no fear! CNBlue plans to kickstart their world tour in Seoul with their local fans in May.

Although this is their first time having a world tour, CNBlue already gained experience touring with labelmate FT Island in March last year for the live concert “Stand Up” held in LA, California. The band also traveled to London for a solo concert last September as well as Chile in November for KBS’s music program “Music Bank.”

Meanwhile, CNBlue made a comeback with title track “I’m Sorry” from their 4th mini album “Re:BLUE” on January 14. They are currently placing well on the charts and busy attending various schedules during this promotion period.

Soompiers, what countries and cities do you want them to visit? Maybe if enough Boices raise their voices, the management could add more cities and dates!