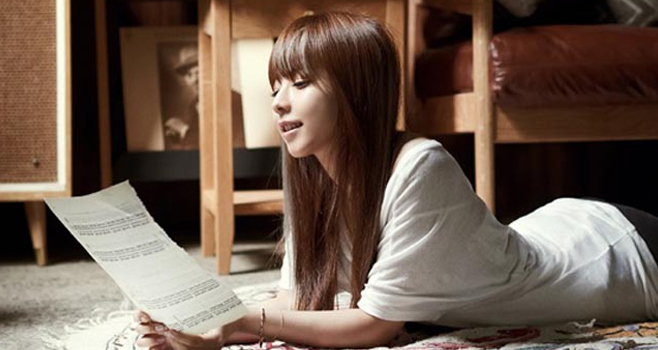 Juniel dusts off her usual pretty and feminine image for a rougher, tomboy look for “Oh Boy!” Magazine. One of 2012’s most promising rookies, Juniel trades her soft, innocent demeanor for the more sporty, more rough-and-tumble appearance as a skater girl. The hip-hop-inspired shoot for “Oh! Boy” recently released a preview photo from Juniel’s feature.

In the photo of her wearing brightly colored sneakers, folded pants and a baseball cap, Juniel sheds the dainty dresses and sweet shoes she is mostly seen in her onstage appearances and performances. The magazine’s shoot staff is reported to have praised the young singer’s charm and unconventional transformation from an innocent, impressionable young lady to a casual, boyish girl.

Netizens who have seen the photo commented with “Her casually dressed appearance is also attractive,” “I thought you were a girl group member,” “This concept is also really pretty on her,” and other such reactions.

Meanwhile, Juniel is set to perform in Cannes’ MIDEM Festival, the world’s largest trade fair for the music industry. She is slated for the VIP stage, at the Palais des Festival on January 27.

Oh Boy!
Juniel
magazine
Midem Festival
How does this article make you feel?