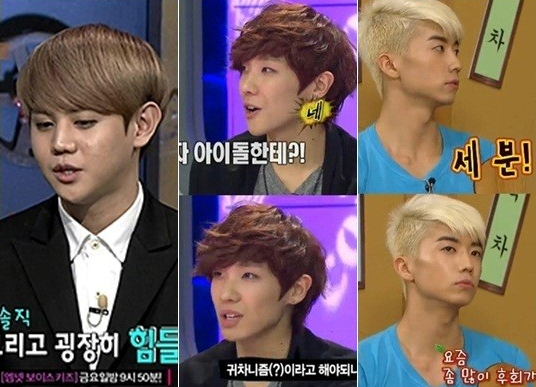 Idols Who Have Turned Down Other Celebrities’ Confessions

Recently BEAST’s Yoseob shared, “I have received a love declaration from a celebrity, but I declined,” piquing viewers’ interest. If you think about it, quite a few idols have come out and stated that they’ve been approached by fellow celebrities. They all had their reasons for declining the other’s feelings. Scroll through the gallery to which idols were asked out by fellow idols!

On yesterday’s episode of Mnet’s “The Beatle’s Code 2,” the singer was asked whether he has ever dated a celebrity to which he revealed that he has not. He started, “However, I was asked out by one, but I declined.” Regarding the reason, he said, “It’s not like I didn’t like her. I liked her, but I was afraid. I didn’t think I would be able to handle it if I met a fellow celebrity.”

He added that while they are not lovers, they are still good friends. Mischievously, the emcees did their best to identify the female idol. Yoseob firmly stated, “To protect her, I cannot tell you who she is.”

During an episode of MBC’s “Golden Fishery – Radio Star,” MBLAQ’s Lee Joon also revealed that two female idols asked him out but that he refused them both because he was too lazy to date. He confessed, “I’m kind of lazy, so I don’t really date. I like to lie on the couch at home and watch TV.”

2PM’s Jang Woo Young shared that three female idols confessed their feelings for him. He also admitted that he belatedly regretted turning them down.

After School’s UEE also admitted that she had been asked out by a couple of celebrities while filming her hit drama “Ojakyo Brothers.” During an episode of “Golden Fishery – Radio Star,” she stated, “While I was working on a project, two people approached me and revealed their feelings for me. However, because of our company policy, and because my work is a priority for me, I would change my cell phone number whenever he called. I’m afraid, so I refrain myself to begin with.”

KARA’s Han Seung Yeon’s reason for not dating is quite similar to Lee Joon’s. On “Happy Together S3,” she shared, “I like being at home the most. If I start dating, that means I have to go outside.” She added, “You have to pay attention to so many little detail, and you have to spend a lot of money,” humoring fans with her honesty.