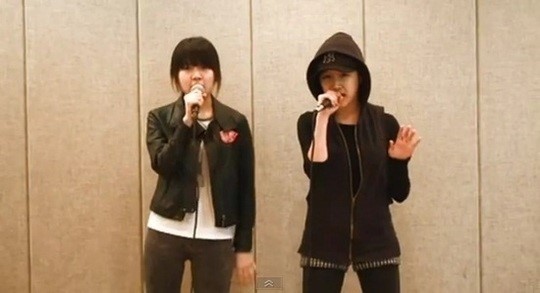 YG’s new girl group is still shrouded in mystery, but after revealing 2 confirmed members (Kim Jisoo and Jennie Kim), that mysterious cloud is slowly dissipating. But, to many fans, it’s disappearing at a very slow rate. However, to tickle the fans’ interest, YG recently dropped another hint to the girl group formation.

On January 23, an official at YG Entertainment shared, “Yuna Kim and Kim Eun Bi were strong candidates for the new girl group, but one of them has been dropped. Because CEO Yang Hyung Suk was directly involved in the girl group’s selection and training process, not much news have been leaked out. These two girls were set to debut with the girl group even up to late last year and the atmosphere at YG looked favorable at their inclusion, but why one of them has been dropped- no one explained.”

YG posted a practice clip of the two covering Sam Sparro’s “Black and Gold” early last year, (You can watch it here) where they showcase their singing and rapping talents. Both girls have their unique voice color, making it a disappointment knowing one of them will not be included in YG’s next girl group.

Many who dream to be singers know how difficult it is to be picked as a trainee at YG Entertainment. Some at Soompi can relate, having participated in the auditions from the agency with undesired results. However, it doesn’t get easier after one officially becomes a trainee at the company as all other trainees are just as qualified. And with such skilled talents, the stakes are naturally raised and the competition becomes that much more fierce. The selection process for this girl group is not any different and even a “confirmed” member last year is no longer one this year.

Both girls are final contestants from the audition program “Super Star K.” Kim Eunbi was a contestant in Season 2 while Yuna Kim particpated in Season 3. Kim Eunbi received a lot of interest in 2011 for her enhanced beauty after losing 8kg. Meanwhile, Yuna Kim is known as “Female Jo Kwon” for her funny charms and wit that she had demonstrated on the audition program.

This new girl group is also being called, “YG’s Girls’ Generation.” The girls are known to be natural beauties who have never received plastic surgery treatment of any kind. President Yang stated, “I started this group because I thought it would be interesting to see a group of pretty girls who can also sing hip hop music.”

Soompiers, can you guess which one was dropped? Also, have you noticed they all have the same surname?