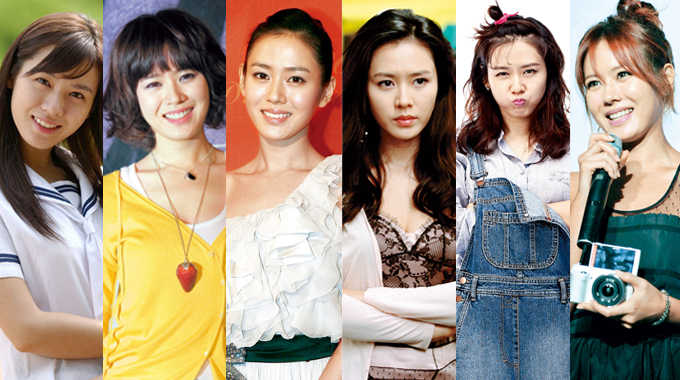 While miss A’s Suzy is currently considered the first love icon, the original first love icon was none-other-than actress Son Ye Jin. In the early 2000s, this lovely actress was the personification of pure, innocent beauty.

2001: She debuted as a CF model and managed to land a lead role in her first drama “Delicious Proposal.” With her doe-like eyes and porcelain skin, she was epitome of innocence. She barely wore any makeup, keeping it minimal with lip gloss.

2003: Son Ye Jin showed off a natural beauty during her “Summer Scent” days, and it’s been revealed that it was the actress’s everyday look. She went through filming without a makeup artist, doing her makeup herself.

2005: While she mostly took on tragic roles, Son Ye Jin decided to do an image makeover through a rom-com film “The Art of Seduction.” With long wavy hair flowing to her side, she pulled off a sassy player character, surprising her fans with a whole new Son Ye Jin.

2006: For her character in “Alone in Love,” she chopped off her signature long hair for a much more shorter and lighter style. She had her hair layered so that it didn’t look too light or heavy and dyed it chocolate brown.

2006: She looked elegant and clean-cut with a sleek updo. As with her hair, she kept her look minimal, drawing all the attention to her beautiful face and flawless skin.

2007: Five years after the CF that shot her to stardom, Son Ye Jin made headlines by resigning with Pocari Sweat sports drink. While five years has passed, her youthful beauty and innocence captured the hearts of many.

2007: She emphasized her eyes for this event. Mixing a soft pink with violet for her eyes. Son Ye Jin made her eyes pop with a pearly purple eyeliner and topped it off with a black mascara.

2008: She played a local news reporter in the drama “Spotlight.” As such, she kept her hair tied neatly in a ponytail for most of the drama’s run. However, she paid close attention to making her skin appear flawless.

2010: For her spunky character in “Personal Taste,” she blow-dried, curling her locks with her fingers for a natural wave. She would then loosely tie it up into an apple bob for a natural and plucky look.

2011: After her guest appearance in “Knee Drop Guru,” Son Ye Jin caused quite the craze with her updo. Many beauty sites published how-to articles demonstrating the steps behind Son Ye Jin’s beautiful and natural updo style. Her hair stylist revealed that it only took ten minutes to create this look!

2012: Son Ye Jin’s always wanted to try dying her hair reddish brown, and it looks like she found the opportunity to do so during her down time. For a healthy glow, she also tried tanning. With dark eye makeup and color contact lenses, she gave of a mysterious and sexy charm.

“It’s already been eight years since I’ve been in charge of her makeup. Her skin is very sensitive, so I use different foundations for different days, depending on the state of her condition and skin. It’s most important to emphasize Son Ye Jin’s strengths through makeup rather than to cover it up and create another person.” By Hwa Ju (manager at Jenny House)