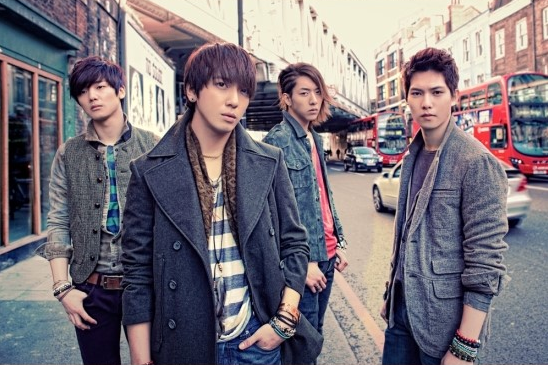 CNBlue participated in the recording of the upcoming episode of “Yoo Hee Yeol’s Sketchbook.” During the recording, the boys talked about their latest comeback, as well as their acting experiences.

Just for fun, MC Yoo Hee Yeol brought up each member’s dramas and evaluated them by their ratings. Kang Min Hyuk’s “You Rolled in Unexpectedly” took home the number one spot with a high rating of 49.2%. Lee Jung Shin’s “My Daughter Seo Young” and Lee Jong Hyun’s “A Gentleman’s Dignity” followed with strong ratings. Regarding Jung Yong Hwa’s dramas, which include “You’re Beautiful” and “Heartstrings,” Yoo Hee Yeol said, “I won’t go further,” drawing laughter among the audience. Jung Yong Hwa laughingly explained that his dramas were popular overseas and that he doesn’t understand why weren’t well received in Korea.

Regarding any changes since they started acting, they explained, “Since we starred in dramas, many people started recognizing us, and we started getting more camera time.” Min Hyuk continued, “Back then, I would show off my drumstick skills, but they were never captured on camera, so I was upset.” Following that, he was given the time to show off his hidden drumstick skills. The other members were also given the spotlight to showcase their talents.