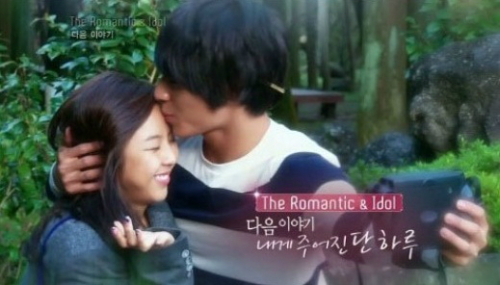 Handsome idol Jonghoon from FT Island is proving to be quite the romantic gentleman on celebrity dating show “The Romance and Idol.”

On the January 27 broadcast of tvN‘s “The Romantic and Idol” Jonghoon and Jewelry‘s Ye Won went on their much anticipated date. The preview at the end of the previous episode showed a sweet forehead kiss that gave the viewers great interest in how their date would go. TvN released three stills of their date: one with the forehead kiss, another with Jonghoon putting a jacket over Ye Won’s shoulders, and the last one with Jonghoon’s attempt at making a heart.

During the date, Jonghoon was quite gentle, a contrast between the straightforward and blunt personalities of the other male idols on the show. He affectionately took care of Yewon in a romantic gesture to win over her heart. When Yewon was cold he took off his own jacket and covered her with it. At her request he even did some aegyo. As he made a heart with his arms he said, “Yewon, I like you a lot, love you.”

Jewelry
tvN
Yewon
KPLG
F.T. Island
The Romantic and Idol
Jonghoon
How does this article make you feel?