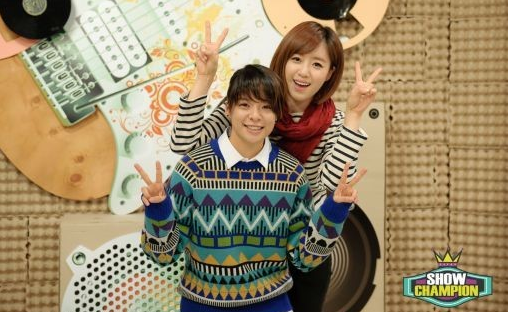 T-ara’s Eunjung and f(x)’s Amber have been selected as the new MCs for MBC MUSIC’s “Show Champion.”

On January 29, “Show Champion’s” production team announced that they have decided on Eunjung and Amber as the replacements for Shindong and Kim Shin Young.

Production director Park Chan Wook stated, “Eunjung has a lot of experience under her belt, having starred in several variety shows and emceed special programs. Amber has a very mysterious and androgynous charm. I believe the two will have good synergy with each other.”

The two idol stars recently participated in a recording session to film their introduction. It’s been said that they displayed great teamwork and fooled around like sisters.

Regarding their new MC posts, Eunjung and Amber expressed, “We’re a little burdened because Shindong and Kim Shin Young sunbaenims had such great chemistry together. However, we too will show off our great teamwork and emcee skills.”

Eunjung and Amber’s first show will air tomorrow, January 30. To celebrate their beginning, they will hold a special performance onstage.