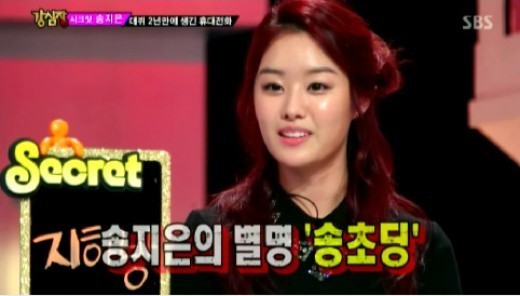 On SBS’s variety show “Strong Heart” that was aired on January 29, group Secret’s Song Ji Eun stated that her nickname is “Elementary Song.”

When the MC asked how she received such a funny nickname, Song Ji Eun explained, “I have smooched before, but have never been really kissed. I have never been in a real meaningful love.”

Song Ji Eun added, “So whenever I sing a new song, I get criticized by the song writers for the lack of emotion. They say I sing every song the same.”

Meanwhile on this episode, Song Ji Eun also revealed that unlike the popular belief, she makes the highest earning in her group due to the fact that she does most of the song choruses.