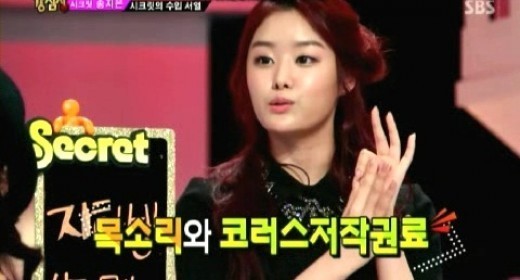 Song Ji Eun recently revealed that she is the top earner of her female idol group SECRET.

Song Ji Eun began by stating, “There was an instance were the news published reports stating that if SECRET members were ranked according to the size of their income, Sunhwa would rank first while I would come in at second place.”

She explained, “However on the accounting books of the company, you would find that there’s a revenue flow for royalties from copyrights to providing your vocals to a song or to a chorus of a song.”

She went on, “Most singers are unable to be selected to be part of the chorus, however ever since the beginning I have always been known as the one responsible for SECRET’s chorus. Once “Shy Boy” and “Starlight, Moonlight” became hits, I began to see substantial revenue flow in from having participated in the chorus for these songs.

Secret
Song Ji Eun
KPLG
How does this article make you feel?