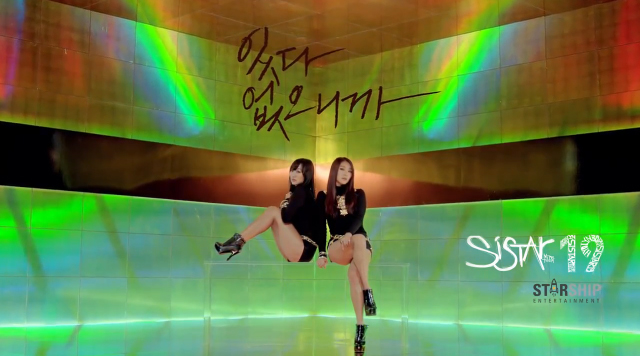 SISTAR19 Releases MV for “Gone, Not Around Any Longer”

SISTAR19 makes their comeback today with their first single album and new music video for “Gone, Not Around Any Longer.” There has been much anticipation for their comeback as their debut track “Ma Boy” became a huge hit in 2011. Their recent teaser also revealed that they would be returning with their sexy concept.

As previously reported, model An Jae Hyun appears in the music video and gives Bora a forehead kiss.

The song was produced by Brave Brothers, who’s known to have made a few of SISTAR‘s previous hits like “Push Push,” “So Cool” and “Alone.”

Other songs in the single include, “Sistar19,” “A Girl in Love,” and their previous hit song “Ma Boy.”

The duo also recently revealed their “Coming Soon Interview.” Subtitled in English, the two talked about their feelings for this new comeback

Hyolyn
Bora
SISTAR
SISTAR19
KPLG
How does this article make you feel?