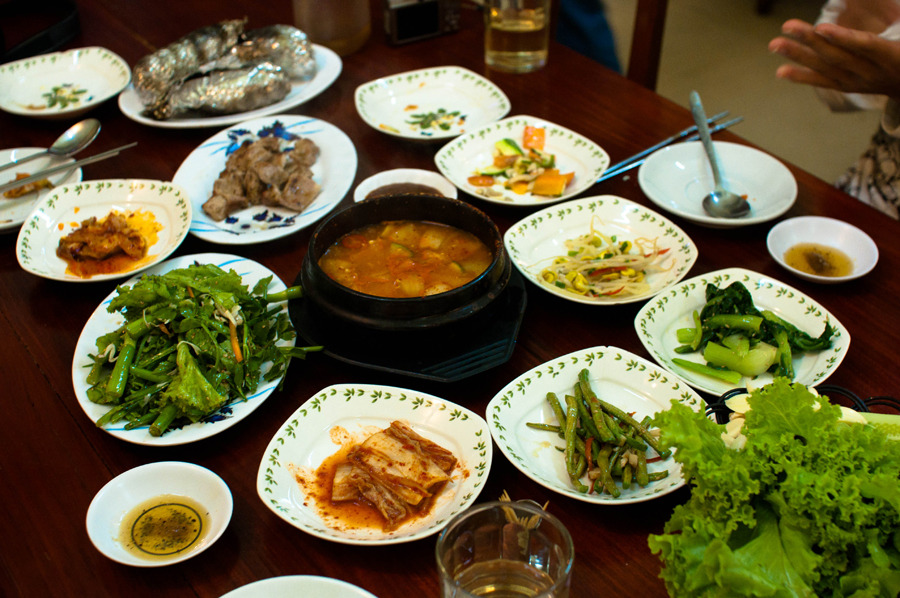 Do You Know Your Korean Food? Part 2

Continuing from the post before, here is part 2 of “Do You Know Your Korean Food?” (Here is a link to Part 1)

Sundae is a Korean dish made of cow or pig’s intestines that are stuffed with noodles, barley, pork blood, scallions, and etc. In a sense they are very similar to sausages. Sundae is often eaten together with Tteokbokki. Sundae is often sold on street vendors in South Korea.

This is a popular Korean snack that is made of rice cake, meat, eggs, seasoning, and spicy sauce. The common form of “Tteokbokki eaten now is very spicy but in the past it was more of a stir-fried dish made with soy sauce and beef. In the picture you see Jang Geun Suk eating Odeng at a street vendor but you can see a dish of Tteokbokki below him.

In the picture you can see Nicole having received a gift of Ganjang Gejang. Ganjang Gejang is fresh raw crabs marinated with soy sauce. “Ganjang” means soy sauce, “Ge” means crab, and “jang” means condiment. The crab is eaten raw so it must be very fresh. Also, this dish is considered one of the best Korean delicacies. (It appears that this food is loved by Japanese tourists) The food was used as an important plot device in “Rooftop Prince.” The protagonist Micky Yoochun was allergic to the food, but he was forced to eat it, because in the drama he was acting like somebody who could eat it.

Jokbal literally means “Pig’s Feet.” It is a popular dish eaten while drinking Korean alcohol. Just like it’s namesake the food is pigs’ feet cooked with soy sauce and spices.

Bean Sprout Soup is often used as hangover remedy in South Korea, because bean sprouts are supposed to be good for your liver! The soup is literally boiled bean sprout!

Kongbiji Jjigae is a stew that is made with soybeans. This stew is considered as a delicacy that is very good for your health.

Kimchi Jjigae is one of the simplest Korean meals to make, as it involves boiling kimchi with other simple ingredients such as tofu and sometimes different kinds of meat. (Tuna is often used as well) Many Koreans eat Kimchi Jjigae with their alcohol.

Galbijjim is a Korean steamed dish made with galbi. The meat that is used is usually beef or port short ribs. The meet is cut up and boiled with soy sauce, sesame oil, scallions, pepper, and sugar. The cooking is done very slowly, so in the end it sort of becomes a type of beef stew! (In the picture you see Haha talking about Galbijjim)

Japchae is a Korean dish made from sweet potato noodles that are stir fried with vegetables, beef, soy sauce, sugar, and sesame oil. This dish can server either cold or hot.

Gulbi is the fish commonly known as croaker which is salted and dried. This fish is commonly consumed in South Korea.

Kkot Gae Tang is Korean crab stew. The stew is very spicy as it is served with red chili pepper flakes and pepper paste.

Bosintang is a Korean soup that uses dog meat as its main ingredient. The reason that the name starts with “Bosin” is because it is believed to be good for your health. This food often causes controversy because it is criticized from both inside and outside of South Korea by animal rights groups. Bosintang has a long history in South Korea.

Agujjim is a spicy steamed dish made with the fish agwi. The dish contains hot chili powder, bean paste, soy sauce, and garlic. A lot of bean sprouts are also included in the dish. Supposedly, this dish was created when fisherman asked cooks to make a dish out of the ugly fish agwi.

Jang Geun Suk
KARA
Nicole
HaHa
How does this article make you feel?