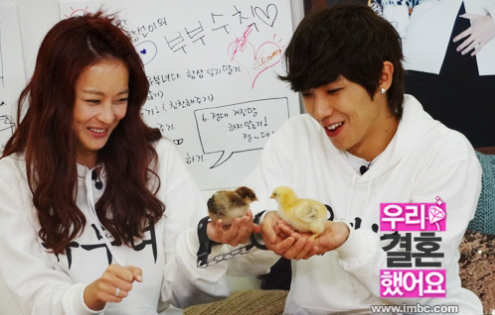 MBLAQ’s Lee Joon and actress Oh Yeon Seo will be leaving MBC’s “We Got Married.”

Lee Joon and his make believe wife, Oh Yeon Seo, recently recorded their last episode of the popular series. Before ending their six-month make-believe marriage, the two stars had their final date.

In order to send each other off with a smile, they visited a rather special place.

It’s been said that Lee Joon unexpectedly did something before parting, which led Oh Yeon Seo to say, “Thank you for being very Chang Sun-like [Lee Joon’s brith name] until the very end,” expressing how deeply moved she was with Lee Joon.

Ever since Oh Yeon Seo’s scandal with her “Oh Ja Ryong Is Coming” co-star Lee Jang Woo broke, netizens have been demanding that she leave “We Got Married.” Although she denied that she was in a relationship, it’s highly likely that the continued protest against the actress and her appearance on the show contributed to the final decision to let the couple go.