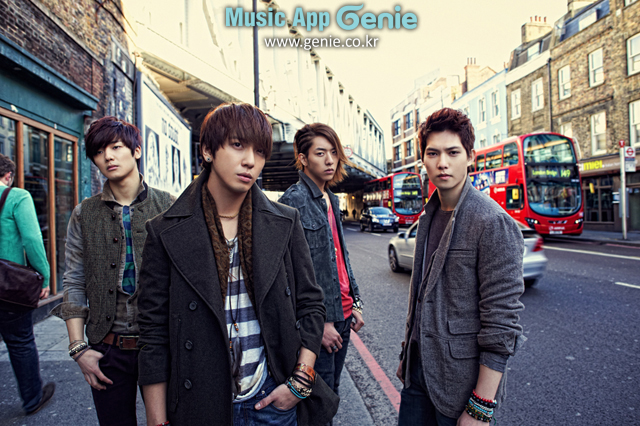 CNBlue makes a comeback with their new mini album [Re:Blue], which marks ten months since their last Korean album promotion. Everyone knows that Jung Yong Hwa composed the title track “I’m Sorry” along with “Coffee Shop,” “The Guy Like Me,” “La La La,” and “Where You Are” while Lee Jong Hyun composed for “Myself More Than You.” The title track “I’m Sorry” especially brings out a refreshing and powerful sound from CNBlue. Then, shall we hear the members introduce their title track and their album?

Jung Yong Hwa: “The title track ‘I’m Sorry’ is a song with burden. The style is different than what we’ve done before so we were worried whether the fans will like it while we were working on it. I tried to put in a lot of pop in the song.”

Kang Min Hyuk: “I really liked the song so I pondered a lot about how to record it. My regrets are as big as my greed, but it’s a relief that the song is well received.”

Lee Jung Shin: “First of all, it’s a song where we put in a lot of work. It’s a song that gives off a different feeling than our other title tracks. More than anything, I really feel happy that Yong Hwa hyung’s song was picked as the title track.”

Kang Min Hyuk: “The whole [Re:BLUE] album is composed by the members. That’s why we thought of it as a new start. Our comeback date is also our debut date so it also symbolizes a fresh start.”

Listening to the members, it’s easily noticeable that they hold a fond attachment to the album and the songs. It’s probably because the whole album was composed by the members, but the album and their style has become more powerful than their previous works! Do you guys feel the same way? After putting their songs on repeat, I became interested in how they came up with this album’s concept and their thought process during the album preparation. That’s why I decided to ask Jung Yong Hwa…

Jung Yong Hwa: “It’s probably because we composed all the songs in this album, but it seems like our styles are just placed inside the album without any filtering. I think that this album probably best represents CNBlue the best right now.”

–
This article is sponsored by Genie, the #1 K-Pop music app service.
Download the “Genie K-POP” app at the Google Play Store http://bit.ly/VjhFn4

Re Born: CNBlue Reborn as Musicians

For a band, being able to compose is one of many important elements. It was mentioned before in the interview, but having all the songs in the album composed by the members must be very meaningful. I guess the best way to express it is that the band members are reborn as genuine musicians. For CNBlue, who is advancing musically one step at a time, I became more interested in their recording process methods as the interview went on. That’s why I asked the members how they composed the songs and how they went about recording them.

Jung Yong Hwa: “I think we use various methods to compose our songs. There’s a song in the album titled “Coffee Shop” and it came into existence in an interesting way. Since I really love coffee, I went to a coffee shop and wrote down how I felt. It was a song that was written very quickly, but I was really happy because the members loved it.”

What do you guys first think of when you hear the word England? Do you think of a double decker bus, the Tower Bridge or the London Eye? However, there’s something more important to talk about. It’s about English bands like the Beatles, Queen, Pink Floyd and also the currently active Radiohead! England is the birth of many bands and a place where many musicians dream. I heard that CNBlue visited the country and had a special experience. It’s impossible not to ask during our interview!

Lee Jung Shin: “Rather than having a special episode, us members were super excited and were restless just because of the fact that we’re shooting a music video in England. It was an awesome experience.”

Jung Yong Hwa: “However you look at it, England is the birthplace of band music. I think that people who like and do music will have interest in England’s music scene. Of course, we’re not that much different.”

That’s right. For people who love band music, they will see England differently. There are many rock festivals held in the summer. I’m jealous of CNBlue because they’re able to go visit the country and film a music video and have a photoshoot there. I agree with “We were restless” 100%. Then, do you wonder what kind of music the members listen to on normal days? Would they only listen to bands from England? Or would they listen to music we’d never thought they would? Because I was so curious, I asked them which foreign bands they’re listening to these days.

Jung Yong Hwa: “I currently listening to music from Oasis a lot these days. I think ‘Stand By Me’ is a good song to listen to when you need healing.”

Lee Jung Shin: “I listen to Maroon 5’s ‘Just a Feeling’ often and really enjoy the emotions felt through the song.”

Kang Min Hyuk: “I enjoy listening to Keane and Maroon 5. I especially enjoy the melody of Maroon 5’s ‘Daylight.’”

So it looks like all the members are listening to various band music. CNBlue fans can better understand band music by listening to their current bands like Oasis, Maroon 5, Eagles and Keane.

The interview will soon end. Time flew by so fast as I talked with the members about their work, recording process and stories in England. Now I want to hear about CNBlue’s goals and dreams. What are your biggest dreams?

Lee Jung Shin: “My biggest dream is for our four members to continue as CNBlue for a long time. More than anything else, I think that would be the most awesome and joyful thing.”

I think that the fans and also the readers of the article will wish for the same thing. I wish that the members will promote as CNBlue not only in Korea, but also overseas for a long time.

Jung Yong Hwa: “For this year, we’re planning to have a lot of music schedules and even overseas tours. We will also try our best to show how much we wanted these types of scheduled activities.”

Lee Jong Hyun: “When we promoted in Japan as well as other foreign countries, I feel like we were able to show that K-Pop has a lot of various colors. I have a lot of pride because of that.”

Just like what the members said, it would be great if the various music of K-Pop can be heard. It seems like today’s interview was a great interview not just for fans, but for many people. Lastly, please leave a message to the fans and readers as a close for the interview.

CNBlue: “Everyone, we’re happy that we can greet you through this interview. Thank you for loving our new album [Re:BLUE]. We’re really happy that we can share our composed songs and will work hard to provide good music and performances. This has been ‘CNBlue!’”