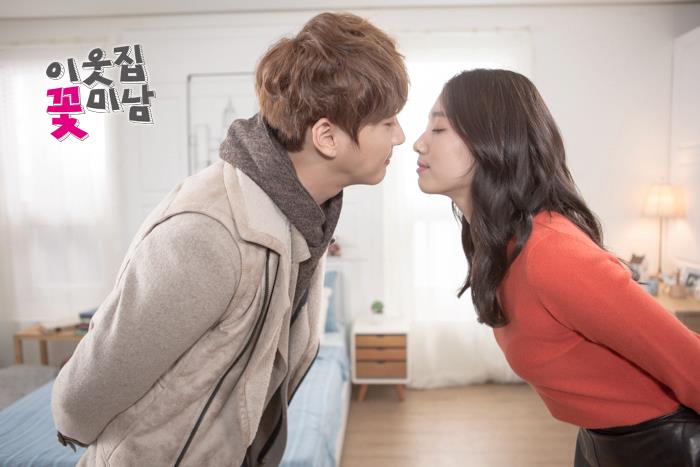 I was so excited to hear that Amanda from Outside Seoul was going to write about cable network tvN’s surprisingly wonderful Oh Boy! series. Don’t be fooled by the silly titles – there is all sorts of goodness stuffed into these shows. I especially love the currently-airing Flower Boy Next Door. Join the discussion at our awesome FBND thread! -soomp

But it turns out that each of this series’ three installments has a lot more to offer—edgy production values, nuanced characters, and real insight into what it means to be young and searching for a future in today’s world.

So let’s take a moment to appreciate the most stunning recent development in drama land: every single one of tvN’s Oh boy! shows is actually good.

The concept: Pretty boys work together at a family-owned restaurant that specializes in ramyun.

The flower of my heart: Lee Ki Woo’s gentle giant Pillar, who fills the screen with sweet-hearted, narcoleptic charm. The male lead is a bit too groomed even for a flower boy (and appears to be eyebrowless, thanks to a haircut so trendy it’s already dated less than a year after the show finale).

The standout: Ba Wool, the tough high-school student with a heart of gold. His nickname is “Crazy Rooster.” Need I say more?

What it’s lacking: This show isn’t as good with the darker emotions as it is with the zany laughs, which makes it feel shallow to some viewers.

What it has that the others don’t: Hot, hot kisses. (See above.)

What it really is: A coming of age story with a gritty, indie-rock vibe that focuses on a group of rebellious high school boys hungry to become rock stars. Along the way, they fight against the world, against each other, and against growing up, all the while trying to become the men they want to be.

The flower of my heart: Drummer Jang Do Il. This guy may not be much of an actor, but he sure is a looker—the only thing prettier than his scowl is his smile.

The standout: Byung Hee, the charismatic, slightly insane band leader the rest of the show’s characters orbit around, even long after he’s gone.

What it’s lacking: If you’re in it for the romance alone, this may not be the show for you. While there is a love story, the real heart of SUFBB is the tender (but realistically rough-and-tumble) bromance between the members of Eye Candy.

What it has that the others don’t: The gritty, working-class universe that surrounds the story and gives way to an insider peek into the world of Kpop hopefuls.

The concept: A girl loner lives in a neighborhood chock full of flower boys. (Some people have all the luck.)

What it really is: A surprisingly moving, community-minded character study that centers on one of Kdrama’s most original female leads—a wounded, socially awkward editor who prefers spending time in her apartment to being out in the world. Even the extreme proximity of unimaginably hot flower boys can’t lure her out, until quirky Enrique Geum emigrates from Spain to take up residence her heart.

The flower of my heart: Puppyish Enrique, who practically vibrates with energy and guileless good will. If you were to add up the cuteness of every single baby animal alive on the planet at any given moment, the total would still be several hundred ducklings (and at least one Korean-speaking elephant) shy of his massive appeal.

The standout: The over-worked, over-opinionated editor of Jin Rak’s webtoon, who has stolen every scene she’s been in with her exasperated commentary.

What it’s lacking: There are rumblings that some viewers think the plot is moving too slowly, and that the ensemble cast is too jam-packed to allow satisfying development for all the characters. (While there’s probably truth to both these complaints, at its midpoint I think Flower Boy Next Door’s many charms more than offset its few failings.)

What it has that the others don’t: An outsider’s view of the world, thanks to the characters of Enrique (who’s just moved to Korea) and Dok Mi (who’s actually a citizen of her head more than she’s a citizen any country).

According to rumors, that the next installment in the Oh Boy! series will be called Flower Boy Agency and likely share a theme with the 2010 movie Cyrano Agency, which detailed the workings of a matchmaking organization that used hands-on strategies to make people fall in love. (For more, see the January 30th update at The Vault of Doom.)

To date, the Oh Boy! shows are drawn from popular drama genres: foodie stories, music-centered plots, and workplace romance. In light of the recent trends, maybe future installments will have a supernatural angle? A flower-boy sageuk would be fun, too, although Sungkyunkwan Scandal has that pretty much covered. And you can’t go wrong with stories about girls pretending to be boys, which would in this case would provide a fun opportunity to crack jokes about how high-maintenance flower boys are, even compared to girlie girls.

What other drama themes do you think are ready for an infusion of flower boys?

For more Kdrama reviews and commentary, visit Outside Seoul.