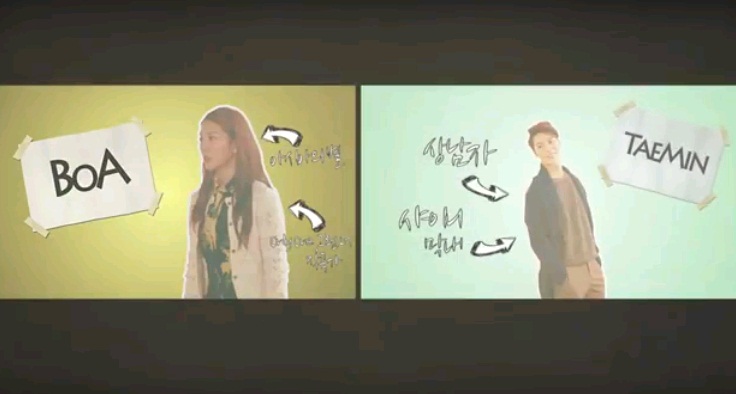 After releasing the “choose your own ending” music video of BoA‘s “Disturbance“, SM Entertainment released the making of video on their official SMTOWN Youtube channel.

The video introduces BoA as “Asia’s Star” and “Only One and Disturbance Composer.” Taemin is “Manly Guy” and “SHINee‘s maknae.” BoA’s brother, Kwon Soon Wook, is also introduced as the music video’s director.

The filming starts at 8AM, and Taemin and BoA do their best to control their laughter during the serious scenes. By 2PM Taemin must say “I Love You” to BoA but the two’s sibling-like relationship makes it difficult for them to do it seriously. The video notes that the music video was made in the style of 80s Coming-of-Age movies.

The filming goes on to 12am, and while BoA films her solo shots, Taemin tries to stay awake off screen. The video notes that it only took one take for BoA to complete her tears scene.

At the end of the video BoA says to the camera, “What can we do. If we do this quickly, we can end quickly.” Then she sings a line of SHINee’s “Lucifer” with Taemin.

BoA
Taemin
KPLG
How does this article make you feel?