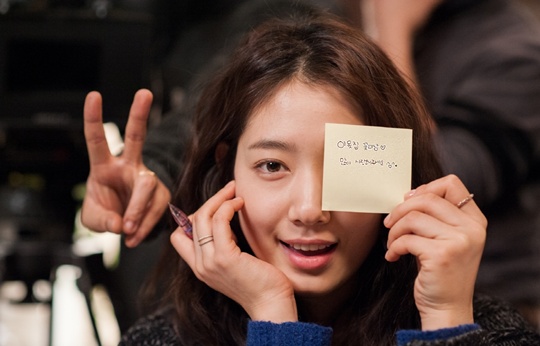 On February 4, Park Shin Hye shared a picture of herself playfully posing with a small handwritten memo. The memo reads, “Please show ‘My Flower Boy Neighbor’ lots of love.” There is a pencil held in her right hand, making it easily believable that she wrote the letter herself. An unidentifiable person behind her photobombs the picture with a peace sign, hinting a fun filming atmosphere on set,

Park Shin Hye takes on the character Go Dok Mi who is similar to Rapunzel, confined to her small apartment in the middle of Seoul. But she starts to change after her encounter with video game designer Enrique (played by Yoon Shi Yoon).

Meanwhile, “My Flower Boy Neighbor” will air its 9th episode on February 4 at 11pm (KST).

Park Shin Hye
KPLG
My Flower Boy Neighbor
How does this article make you feel?