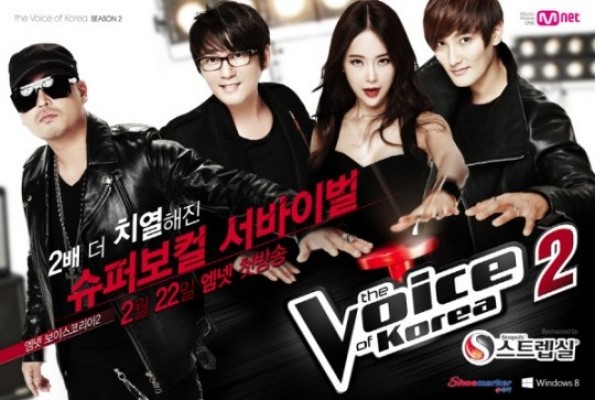 Mnet’s “The Voice Korea” revealed the poster for “The Voice Korea Season 2” on February 4. The poster shows four coaches from the first season of the show, Shin Seung Hoon, Gil from LeeSsang, Baek Ji Young, and Kangta, all reaching out a hand to press the button in front of them.

“The Voice Korea Season 2” changed its preliminary round processes to improve the overall quality of the show. As a result, the show has been extended to 15 episodes total. The way coaches pick competitors to work with has changed according to the new, improved format of the show.

Producer Lee Sang Yoon commented, “Last year when we first presented the show, the entire audition process seemed new and strange. So everyone, including the producers, coaches, participants, and viewers, thought the show was very fresh. This new and unfamiliarity of the show contributed much to the show’s popularity. However, we have made some changes to this process in the second season. We upgraded the audition process so that each and every competitor on the show will be judged and analyzed more carefully. We also gave more responsibilities and authorities to the coaches to pick competitors, allowing them to compete with each other a little bit more. Overall, the changes we’ve made will make the show more interesting.”

Stay tuned for more news on “The Voice Korea Season 2!”