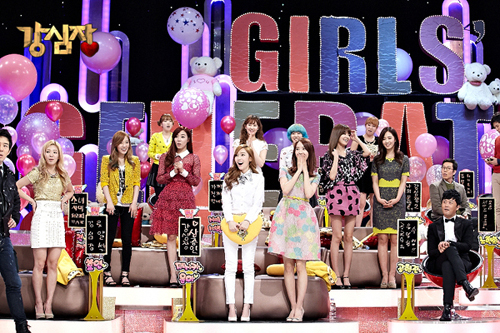 On February 5, the Girls’ Generation members were invited as guests on SBS’s variety show “Strong Heart,” where they revealed a picture from their party.

The revealed photo was taken while they were in Japan for their concert tour. Instead of going to a fancy restaurant, they held their party in a room where the group was staying.

In the picture, the members appeared to be very comfortable in their natural setting wearing no makeup and in fact, some of the girls posed with their facial mask packs. The girls are seen partying with a bit of alcohol accompanied by some snacks.

When emcee Boom saw the picture of Hyoyeon‘s head wrapped in a towel, he made the audience laugh by saying, “You look like Chae Rina [from 90s idol group RooRa]!”

Sooyoung explained, “This is our place in Japan. We named it Icheungkaya. We created it from the word, Izakaya. We just bought some beers and partied by ourselves.”