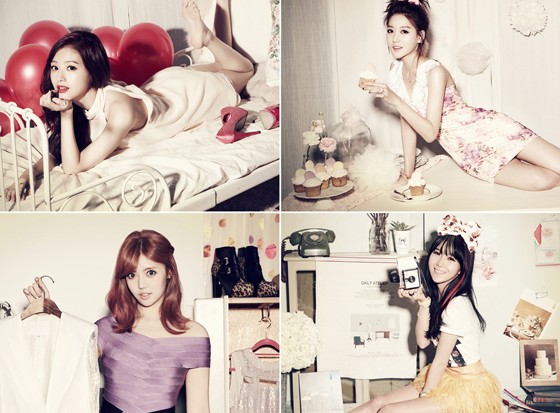 The first round of teaser images for girl group Rainbow‘s come back have been released!

On February 6, four teaser images for Rainbow’s first full-length album, “Rainbow Syndrome” have been released. The four images feature Jae Kyung, SeungA, Yoon Hye and Hyun Young, who have posed with the concept of being “sweet party girls.”

Rainbow’s first full-length album has been divided into two parts to showcase the group’s musical transformation and development.

Rainbow’s agency commented, “We are planning on filling this album with Rainbow’s bright, healthy and cute image,” and “Images of Woori, Ji Sook and No Eul will be released on February 7 as well as the group cut.”

Rainbow will hold their come back showcase on February 13. This is their first come back after a year and eight months of hiatus.