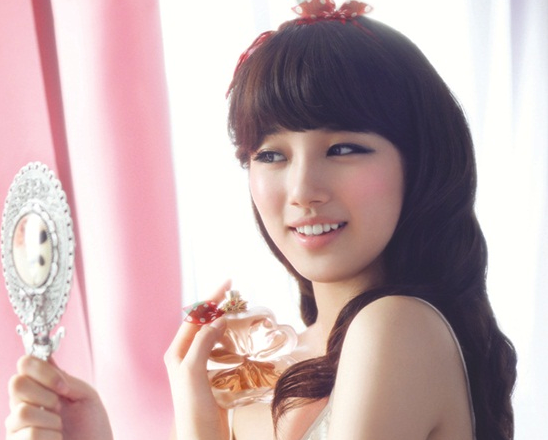 “Nation’s First Love” Suzy came out on top as the CF Queen of the year 2012 with 15 endorsement deals. Although the starlet had to reckon with Girls’ Generation and their “Group Brand Power,” Suzy was able to hold out on her own with an impressive line of contracts.

It was reported that Suzy’s brand image strength can be traced to her “Anti fan-less Bright Image.” She first earned the nickname of “Nation’s First Love” from her role in “Architecture 101.” And through her various accomplishments, she has entered the hearts of many viewers.

A popular trending post on online forums titled “Suzy’s Day” compiles most of the brands that Suzy has modeled or currently models for. It goes along the lines of “Once Suzy wake up she sips her ‘Denmark Drinking Yogurt’ and then washes her face. Then she puts on her ‘TN skin lotion’ before she changes into her ‘Smart Uniform.’ Then she puts on her ‘Reebok’ shoes and takes her ‘BeanPole Outdoor’ bag to school. With friends, Suzy takes photos with her ‘Canon Mirrorless’ digital camera. After school, Suzy heads to practice at JYP with miss A where they order ‘Domino’s Pizza.’ After two hours of practicing choreography, miss A members all take one shot of vitamin drink ‘Vita 500.’ Once they return to their dormitory, they play ‘Nintendo Super Mario Bros’ game before going to sleep.”

However, when it came to girl group rankings, Girls’ Generation came out on top with a whopping total of 21 brands they modeled for. Industry insiders say that the brand power the group can be attributed to Girls’ Generation’s “individual but whole” quality that sets them apart. In second place was miss A, whose CF endorsements can be mainly attributed to Suzy with 16 brands. In third place was SISTAR with 14 brands, boasting a “healthy and sexy” image whereas the groups in the top two spots boast “Innocent and sweet” images. SISTAR is frequently referred to as the “Nation’s Sexy Female Idol Group.” In fourth place came KARA with ten brands and in fifth place came 2NE1 with nine brands.

Girls' Generation
Suzy
Kim Tae Hee
miss A
How does this article make you feel?