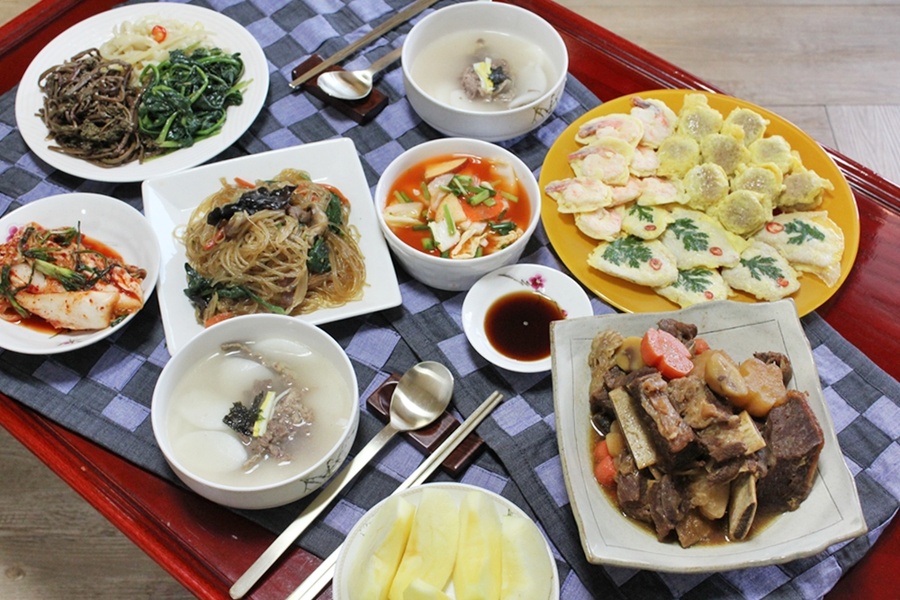 Do You Know Your Traditional Lunar New Year’s Food?

Happy Lunar New Year’s everybody! In South Korea, we call the lunar New Year Seollal! Even though you might not be in Korea enjoying the holiday, Soompi wanted to make sure that you could still learn about some traditional Seollal food. Hope you enjoy the list!

Koreans celebrate Seollal on either January 1 or on the lunar New Year. Regardless of when they decide to celebrate it, New Year’s wouldn’t be New Year’s without some Tteokguk! This soup contains broth with sliced rice cakes. Tteokguk is eaten on Seollal because it is supposed to grant luck and also it signifies gaining one additional year in life. (The bottom picture shows Rainbow’s Jaekyung about to enjoy some Tteokguk!)

Galbijjim is a Korean steamed dish made with galbi. The meat that is used is usually beef or port short ribs. The meet is cut up and boiled with soy sauce, sesame oil, scallions, pepper, and sugar. The cooking is done very slowly, so in the end it sort of becomes a type of beef stew! (In the picture you see Haha talking about Galbijjim.)

Japchae is a Korean dish made from sweet potato noodles that are stir-fried with vegetables, beef, soy sauce, sugar, and sesame oil. This dish can be served either cold or hot.

Everybody loves Korean style pancakes! Jeon is made with sliced meats, poultry, seafood, and vegetables. It all depends on what kind you want! These are then mixed with flour/egg batter and pan-fried. Traditionally on Seollal Koreans will eat different kinds of these in a smaller rounder version.

Yaksik actually means medicinal food. It is a sweet Korean dish made of glutinous rice with chestnuts, jujubes, and pine nuts. It is often seasoned with brown sugar, sesame oil, and soy sauce. Traditionally, it was eaten on January 15 of the lunar calendar but it is now eaten on several different Korean holidays.

Dong Geu Rang Ddaeng actually means round shapes. This pancake falls under a type of “Jeon.” It is usually made with either pork or beef mixed with vegetables. However, in comparison to typical Jeon, this pancake is made a lot thicker and has a very round shape.

Yakgwa is a traditional Korean dessert. It is made from honey, sesame oil, and wheat flour. The reason why the dessert contains “yak” or medicine is because honey was believed to have medicinal properties.

Sujeonggwa is a Korean-style fruit punch. The color is reddish-brown and it is made from dried persimmons, cinnamon, ginger, peppercorn, and pine nuts.

Tteokgalbi is somewhat similar to meatloaf that is commonly eaten in countries such as the U.S. However, this Korean type of meatloaf is actually a mixture of beef and pork. This mixture is made into a rectangular shape.

Jaekyung
Rainbow
Korean Food
How does this article make you feel?