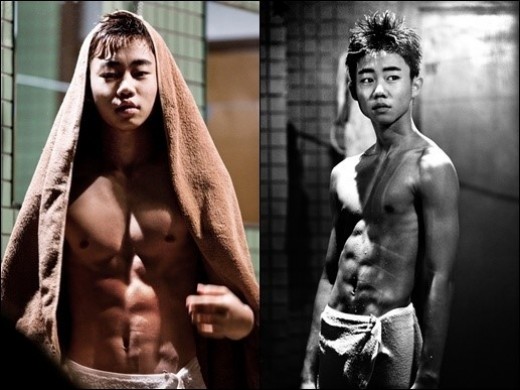 On February 8, photos of the actor with his upper body exposed were posted on the official website of SBS’s “Incarnation of Money.” In the photos, Park Ji Bin’s abs are noticeably defined and chiseled.

Park Ji Bin plays the younger teen counterpart of Kang Ji Hwan‘s character in the drama. It was reported that although Park Ji Bin still possesses a young face, once he flaunted his admirable 8-pack, the staff on set were taken by surprise and reminded that the young actor was becoming a man.

Not only that, Park Ji Bin has been receiving compliments for his maturing acting skills that have accompanied his mature appearance while filming for “Incarnation of Money.” He has already caught the attention of many viewers for his continual growth as an actor.

Netizens who saw the photos commented, “It’s a step above a 6-pack”, “He’s growing up so fast”, “He’s really trim and fit”, “I got shocked when I saw those photos!”, “Park Ji Bin has a great body” and “He’s in top shape!”

In related news, Park Ji Bin’s abs will be featured on the next episode of “Incarnation of Money” scheduled to air on February 9.