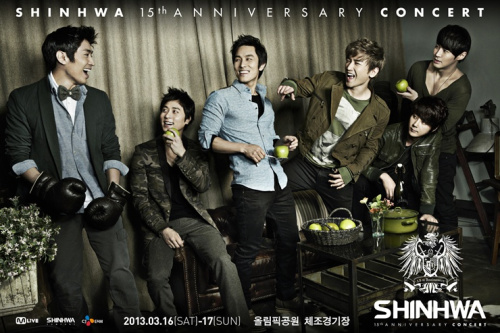 On February 8, Shinhwa’s agency announced the legendary group’s comeback through their official website (http://www.shinhwacompany.co.kr). The poster for their comeback “2013 SHINHWA 15th Anniversary Concert” to commemorate the group’s15 years since their debut was revealed.

Large scale banners for the ‘2013 SHINHWA 15TH Anniversary Concert’ are visible hanging on interchanges, bridges and streets of Seoul, attracting the attention of everyone passing by.

In particular, some of the super-sized banners are large enough to see from far away. The phrase, “THE LEGEND CONTINUES,” is written to give notice that once again, Shinhwa is creating a new history.

More street banners will be hung mainly around the Jongno area of Seoul starting next week.

Shinhwa is the only group amongst all the early Korean idol groups to maintain all of their members since day one. With their anticipated perfect performance and great team work, fans will feel a lot of passion and excitement at the 15th anniversary concert.

Shinhwa is co-producing the ”2013 SHINHWA 15TH Anniversary Concert” with CJ E&M. The two day concert will be held at the Seoul Olympic Gymnastic Stadium on March 16 and 17. Tickets will be released for sale starting February 13.