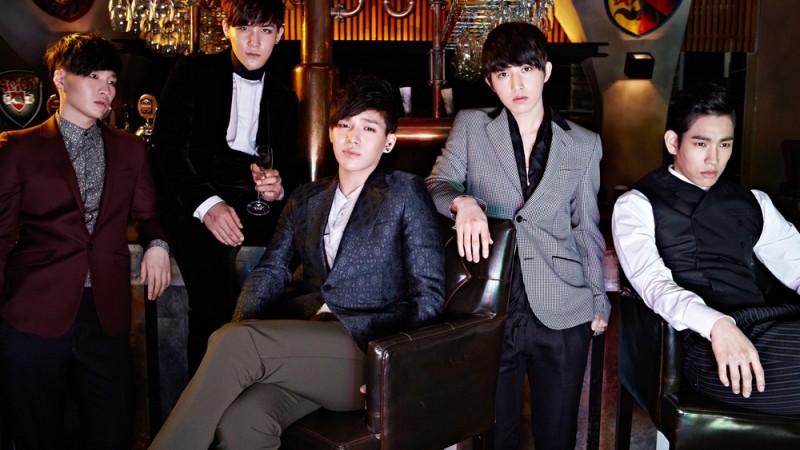 DMTN: Stuck in the Safety Zone?

Hello folks, Soompi is proud to announce a new series of original and reposted guest content from our favorite new site, The One Shots. The One Shots are fairly new but are already gaining recognition for their irreverent but clever insights into K-Pop, and you should definitely check them out. For our debut The One Shots article, we have editor Michelle’s take on chronically (or is that deservedly?) underrated boy band DMTN. Enjoy!

When my colleague Sami wrote a tear-inducing ode as to why U-KISS deserves a drink for being so under-appreciated despite their hard work all these years, I immediately thought of another group that might be able to join the club of under-appreciation: Dalmatian, or DMTN, as they are officially called nowadays. DMTN deserves to be recognized, no doubt about it, and I would love to see them earn more accolades in the future. Still, with their most recent comeback, I’m not sure I’ll be pouring them shots anytime soon.

There’s no denying that DMTN has talent. Prior to their debut, each member was known to have some sort of experience in the industry, whether it was modeling, singing, or even teaching JYP artists how to rap. That experience clearly came through in their official debut (as Dalmatian) under MC Mong’s label, Monkey Punch Entertainment/IS Entermedia in the latter half of 2010. Their first single, “Round 1,” was followed by the release of their first mini-album along with two more music videos for “That Man Opposed” and “Lover Cop.”

Unfortunately for me, my first exposure to Dalmatian was a live performance on one of the music shows, in which the boys were dressed in… dog suits. At the time, I was all about my beastly, manly idols, and still coming to terms with the Jay Park-2PM and DBSK scandals, so forgive me for dismissing a cutesy group that seemed to be taking their name a little too literally. Seriously, grown men (one of them was nearing 30 at the time) in dog suits? Add in that awkward “doggy dog woof woof woof” intro, and well, you can’t blame me for deciding to pass.

After their debut, they went away for 15 months, fading into oblivion and becoming “that one group with the tough guys who try to look cute.” They didn’t even have a chance to pop up on the radar, and that was a mistake. Dalmatian should have taken a page out of B.A.P.’s playbook and flooded the market with their music or shown up on some more variety shows. There was less competition when they debuted, whereas coming back in 2012 amongst the giant tidal wave of rookie groups debuting left and right with even a strong mini-album like “State of Emergency” had a low chance of success.

Fast forward to 2012: Despite being two great rappers down (Day Day left the group while Dari had enlisted in the army), things were looking up, as Dalmatian made one of the best decisions of their career and added Simon to the lineup. Also, it became clear that all of the boys spent their 15 months off frequenting the gym in order to catch an unsuspecting fangirl’s eye with their perfectly chiseled bodies, as displayed nicely in the “ER” music video. It was enough to get me to join the Dalmination and invest my time into finding out why this group had stayed under the radar for so long. I was getting my champagne ready for their next comeback because surely, this new direction they were going in would result in an award soon… right?

News broke that Dalmatian would be leaving their label and signing with another for 2013. Understandable. It’s not like associating with MC Mong did them any favors. Besides, this could have allowed them to pursue the music they really wanted, and I’m all for artistic freedom. Next came the name change to DMTN. Again, I was on board. The boys had already ditched the “doggy dog woof woof woof” concept and had already been introducing themselves as DMTNB for the past year. Daniel’s Twitter handle has been @DMTNDBOY for as long as I’ve known them, and I’m pretty sure the members have used that abbreviation when talking about themselves in their own Twitter updates. So the name change could have signaled a brand-new start. But this is where the good news stops.

One of my greatest pet peeves in K-Pop is the stupid group names that some of these companies come up with and the even stupider meanings that they give to validate their decisions. I wasn’t a fan of the name Dalmatian to begin with, especially when they actually used it to associate themselves with the dog breed, but I can handle an abbreviation of it. DMTN doesn’t sound too bad. But then they decided to make DMTN stand for… Desire. Motivation. Timing. Now. What? I just had to shake my head and pretend that I never learned that bit of information. After all, if it holds meaning for the members, who am I to make fun of it? Unfortunately, many people actually thought that DMTN was another new rookie group, debuting in 2013. It’s sad, but considering the circumstances, it’s also understandable.

To those in the know, the group’s lack of success, coupled with their decision to leave their first label, gave the message that they were unhappy with the way the company handled their careers, and that they wanted to take matters into their own hands. With their new name, it was like they were branding themselves as a whole new group altogether, ready for a fresh start in 2013. And considering that they don’t have much of a past to erase, I’d say this fresh start should be pretty easy to come by.

The problem is, if you are going to make a fresh start, you need to do it with a bang. And this is the problem. Unfortunately, “Safety Zone” turns out to be a great name for their new song… because it literally is within the safety zone of DMTN’s musical abilities. It was almost as if they were unsure of what direction they wanted to take, so they went with a standard song that was a bit underwhelming and boring. Don’t get me wrong. It’s a decent song with a beautiful melody, and the boys look gorgeous in the video. But I can’t help flashing back to my disappointed Big Bang “Tonight” feels, especially when the Dalmatian debut also drew some comparison to the “La La La” days of early Big Bang. I just know they have more in them, and if they continue this Big Bang-like trend, I’ll be waiting for their “Alive” album to resurrect them.

But until then, I’ll be saving up my soju. I still stand by my statement that DMTN deserves more love and recognition for their talents, but unlike U-KISS, they just haven’t done enough to warrant some celebratory or pity shots. Their latest comeback, or shall I say debut, has the boys returning to the dog pound as lost puppies, still trying to find their way in the K-ingdom. Let’s just hope they can make it out before their time is up.

Dalmatian
DMTN
The One Shots
How does this article make you feel?