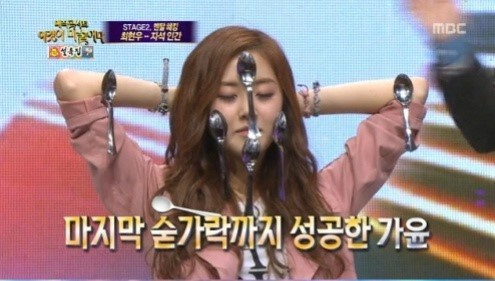 Heo Gayoon, who is currently active as a member of 4minute‘s subunit 2Yoon, has transformed into a human magnet.

On the Lunar New Year special episode of MBC’s “Magic Concert – This Is Magic” that aired on February 10, Heo Gayoon appeared as a guest star where she tried to become a human magnet along with magician, Choi Hyun Woo.

Choi Hyun Woo chose Heo Gayoon as his assistant and proclaimed that he will be sticking spoons on her body. However, the guests and the audience did not easily believe this because they did not think metals could stick to the skin.

But Choi Hyun Woo went on to say, “I have received supernatural power,” and started to put spoons on Heo Gayoon’s face and arms. Amazingly, a total of six spoons were stuck on Gayoon’s body, which surprised everyone.

Netizens who saw this episode commented, “That was so cool,” “They were all serious but for some reason, I’m laughing my head off,” and “Heo Gayoon is Magneto?”

4Minute
KPLG
Heo Ga Yoon
2Yoon
How does this article make you feel?