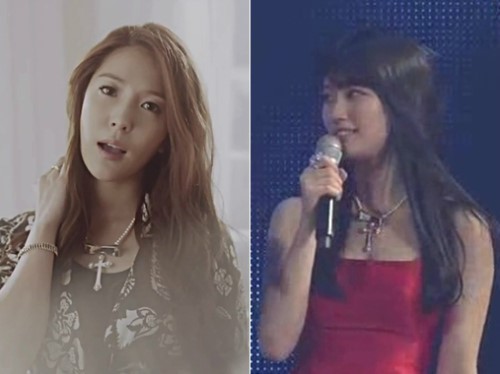 Who Wore the Necklace Better: Suzy vs. BoA

“Nation’s First Love” Suzy and “Asia’s Star” BoA recently received a lot of attention because of the same necklace they wore.

The necklace in question is a beautiful pearl necklace by Delfina Delettrez. As it combines the elements of pearl, ribbon, and cross, the necklace looks chic and elegant.

Suzy, who was present as a MC at “22nd Seoul Music Award Ceremony” on January 31, used this necklace to accessorize her ravishing red mini-dress.

On the other hand, BoA wore the same necklace on her recently released MV “Disturbance.” In the music video, BoA matched the necklace to a black and white outfit.

While the fans found Suzy to create a sexy look as she combined the necklace with a low-cut dress, BoA was found to look chic with the same accessory.

So Soompiers, who do you think wore the necklace better?