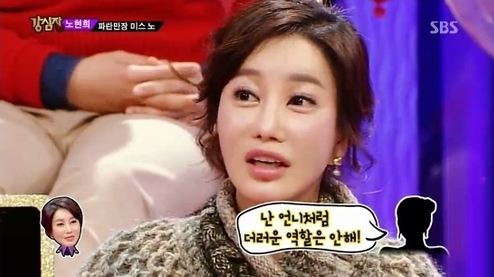 On February 12, Noh Hyun Hee made a guest appearance on SBS’s variety talk show “Strong Heart” where she shared an episode regarding a younger actress.

She started, “My life was full of ups and downs along with my acting career. After debuting as a KBS TV personality, I took on roles where the characters were not respected by society. The various roles included the neighborhood idiot and a lady working at a bar.”

“Since the characters I had were unintelligent, I received quite a few scars as an actress,” Noh Hyun Hee continued. “A junior actress came to me and said, ‘I’m not going to take on dirty characters like you. You’re the representative dirty characters actress.’” She went on, “I remembered the saying that there are small actors, but no small roles.”

Many guests at the studio were surprised by such a comment and MC Shin Dong Yup, furious, commented, “Wow, that’s too much.” He asked, “By chance, is that person active right now? Is she a top star now?”

She replied, “At that time, she didn’t take on any ‘dirty’ characters and had some popularity. But, I don’t see her [on television] these days.”

MC Lee Dong Wook [who is also an actor] explained, “Senior junior relationship aside, that’s something you shouldn’t say as an actor.”

Soompiers, do you agree that “there are small actors, but no small roles”? Or does one taking on characters not respected by society downgrades the person’s credibility as an actor?

Strong Heart
KPLG
Noh Hyun Hee
How does this article make you feel?